Ebola Might Not Be Out Of Control In U.S., But Coverage Is 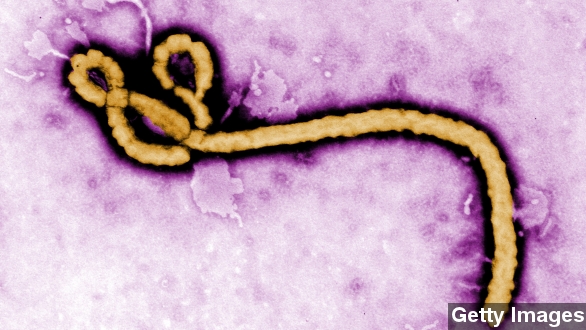 SMS
Ebola Might Not Be Out Of Control In U.S., But Coverage Is
By Jake Godin
By Jake Godin
October 2, 2014
Coverage of the lone Ebola patient discovered in Texas has U.S. media in a frenzy — but does the coverage match the reality?
SHOW TRANSCRIPT

If you're watching the news in the U.S., you might notice a trend.

FOX NEWS: "We're not going to stop flights. Even during this time, even with this scare for the first time with Ebola in America."

MSNBC: "The spread of Ebola in America has so far been limited to just one man."

CNN: "Because it's going on somewhere else, how real is the fear that it should or could happen here?"

FOX BUSINESS: "I'll talk about car sales next hour. You know what? If you don't want Ebola, drive your ass."

So, to fear or not to fear? Online media are just as confusing.

There's panic as children are being pulled from their schools, analysis on who profits from Ebola in the U.S., questions as to how the American Ebola patient "escaped" for two days.

Everything from reports that the patient vomited outdoors to analysis on "ground zero," or the patient's apartment.

But there's also commentary on why the U.S. health care system is the only one that can stop the disease.

At this point, the coverage is overwhelming, and the age-old journalism adage of "If it bleeds, it leads" seems to be prevailing.

Even though the bottom line from the Centers for Disease Control and Prevention remains, "Ebola poses no significant risk to the United States."

It's not airborne. It's easily deterred with proper sanitation. And as The Guardian noted in early August, the disease spreads linearly — that is, one person only infects around one other person. Ebola's spread is not exponential where one person infects dozens of others.

So why is everyone in the U.S. getting so worked up it?

NBC asked that same question in August before news broke about the U.S. patient. A risk communication expert summed it up like this: "We all kind of imagine catching Ebola because that's what you do with something new and really, really, really scary."

A health communication expert who wrote an op-ed in the Austin American-Statesman is a little more pointed with what’s to blame, saying: "when examining the level and tenor of much of the media coverage of Ebola, one might assume that this virus has already spread throughout our country, which it has not. … this is sensationalized journalism."

The CDC's Director Tom Frieden assured CBS News Wednesday the U.S' strong public health system and infection control will help the CDC stop Ebola "in its tracks in the U.S."