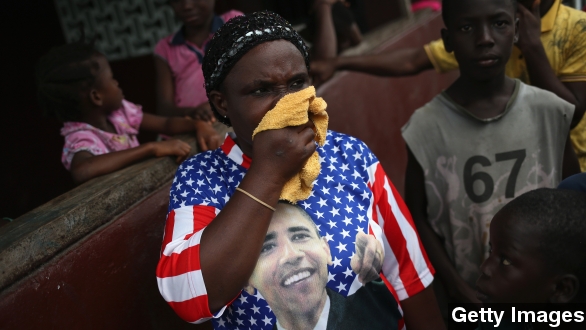 SMS
Ebola Isolation Clinic Looted, Up To 20 Patients Flee
By Jake Godin
By Jake Godin
August 17, 2014
An Ebola isolation clinic in Liberia's capital was attacked by protestors who forced up to 20 patients to flee into the city's densely populated slum.
SHOW TRANSCRIPT

Of all the places to loot, an Ebola isolation clinic probably isn't the best place.

Armed protestors stormed an ebola clinic in Liberia's capital Saturday stealing blood-stained bedding and forcing as many as 20 infected patients to flee into the city's tightly packed West Point township.

According to the United Nation's Integrated Regional Information Networks, or IRIN, the West Point "shantytown" has about 70,000 residents and suffers from debilitating sanitary conditions. The population has access to only four public toilets, meaning street defecation is commonplace.

There are now fears that with West Point's dense neighborhoods, poor sanitary conditions, and the Ebola patients now on the loose it could make fighting Liberia's already serious Ebola outbreak even more complex.

A senior Liberia police official told BBC "This is one of the stupidest things I have ever seen in my life" and that the looting of blood-stained mattresses and bedding could spread the virus to all of West Point.

Sky News reports West Point residents were already upset that Ebola patients were being brought from other parts of the capital to the isolation clinic in their township. The protestors were reportedly shouting that Ebola was a scam created by the Liberian president for money.

According to Front Page Africa, the assistant health minister said Thursday there are plans to quarantine West Point, but first food and supplies must be brought into the township.

While West Point wouldn't be the first place to be quarantined by the Liberian government, it might be the largest if the health ministry does decide to quarantine the area.

Kenya Airways, which is owned by the Kenyan government, announced that flights going to and from Liberia and Sierra Leone will be suspended starting Tuesday at midnight.

None-the-less, the World Health Organization, or WHO, reiterated that the spread of Ebola through air travel is very low and has advised against travel bans.

According to the WHO, more than 400 people have died in Liberia from Ebola and more than 1,100 in total between Liberia, Guinea, Nigeria and Sierra Leone.