Ebola Death Toll Grows Amid Both Optimism And Conspiracy 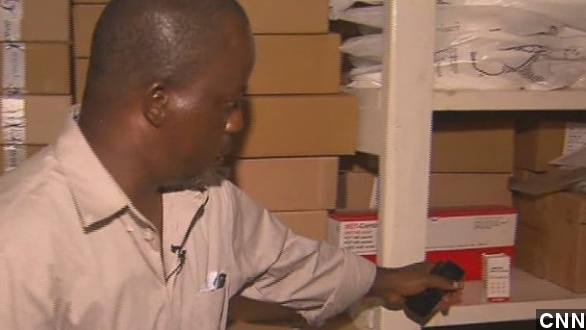 SMS
Ebola Death Toll Grows Amid Both Optimism And Conspiracy

By Jasmine Bailey
September 27, 2014
More than 3,000 people have died of Ebola, though a new HIV drug has shown success in fighting the virus.
SHOW TRANSCRIPT

Just days after President Obama warned the Ebola outbreak in West Africa is a "growing threat to regional and global security" ...

... the World Health Organization has released a report showing just how fast the deadly virus is growing. At the beginning of September the death toll in West Africa was at 2,400.

Now, just weeks later, the WHO reports 3,083 people have lots their lives due to the hemorrhagic fever.

And although the Centers for Disease Control and Prevention estimates 1.4 million people in Liberia and Sierra Leone could be affected by January, there are some signs of hope.

CNN went to an Ebola isolation unit in Liberia were Dr. Gobee Logan has successfully been treating patients with an HIV drug called lamivudine.

CNN: "Dr. Logan has tried the drug on 15 patients so far and remarkably only two have died. Across West Africa the outbreak is killing at a rate at 70 percent but in this group of patients, just seven percent."

The outlet reached out to an American scientist who said the treatment makes sense, saying Ebola and HIV are very similar viruses but that more research would need to be done in order to make the treatment widespread.

And Voice of America reports people in Monrovia, Liberia — one of the worst effected areas in Africa — have "a growing sense of optimism the epidemic can be contained in Liberia, where citizens said they welcomed the help of the United States."

Last week Obama promised to send 3,000 American troops to West Africa over the next six months, also committing hundreds of millions of dollar to help combat the virus.

But within the growing optimism, there are also seeds of suspicion, especially due to articles like this in Liberian newspapers. The information from this piece came from a professor in the U.S.

Dr. Cyril Broderick, an associate professor at Delaware State University, claims the virus was engineered by the U.S., France, Canada and the U.K and is being tested on Africans.

The Washington Post reports much of Broderick's research came from several conspiracy websites.

And unfortunately, Ramen IR notes, "Rumors like these ... become strengthened through mass dissemination and the credibility gained through publication. The public is then mobilized through misinformation. This tendency is especially high in a post-conflict zone like Liberia."

And in Guinea, distrust of foreign aid workers and conspiracy theories over the spread of the disease has led to violence.

Within the past week a team of eight journalists and healthcare workers were murdered by villagers in the country.

Then Tuesday, also in Guinea, six Red Cross volunteers were attacked as they were trying to collect the body of a victim of the disease.

As of Saturday, there were 6,553 people infected with Ebola in Guinea, Liberia and Sierra Leone combined.