Ebola.com Domain Could Be Yours For Only $150K 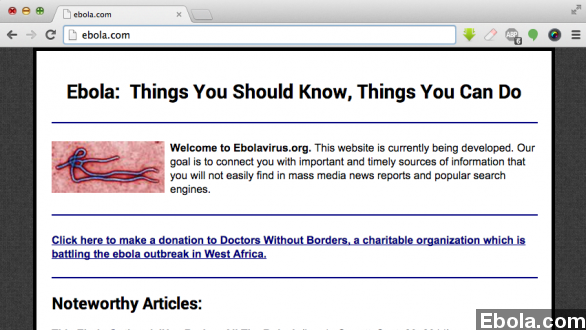 SMS
Ebola.com Domain Could Be Yours For Only $150K
By Jake Godin
By Jake Godin
October 14, 2014
As the number of those afflicted with the deadly Ebola virus continues to rise, one man is trying to turn a profit off the Ebola.com domain name.
SHOW TRANSCRIPT

For anyone who has ever wanted to own a Web domain associated with one of the worst disease outbreaks in recent memory, good news — Ebola.com is up for sale.

The site is pretty bare bones with just a single page containing some scant information on the disease and an ad for Ebola books on Amazon. There are also some links to outdated articles hyping up the worst-case scenario for an Ebola outbreak.

So you're probably wondering, how much does a site like this go for when the deadly disease is making daily headlines?

To find out, CNBC spoke to the man behind the site and president of Blue String Ventures earlier this month — Jon Schultz. He's asking for the pricey sum of $150,000 for the site, something he says is a steal compared to other site sales.

SCHULTZ: "$150,000 is not a tremendous amount for a premium domain. The fact that this is a top news story makes it very reasonable, in our opinion, as many domains sell for seven figures."

It turns out Schultz and his business partner, Chris Hood, have a taste for domains that ring disaster.

PotassiumIodide.com is up for sale in the event of a nuclear catastrophe. Fukushima.com looks to be in a little better shape than the others and is apparently up for bid as well.

They're what Foreign Policy calls "domain squatters" — or folks in the business of buying domain names they think will be worth something in the future.

Schultz is nothing less than a forward-thinking man, telling The Washington Post in a recent interview he snagged Ebola.com back in 2008 for $13,500. Now he tells the paper he hopes to sell it to pharmaceutical companies working on potential cures.

Schultz, who appears to own some less-than-stellar Web domains aside from the disease-related ones, never mentions in either interview whether he has actually managed to successfully flip one of his sites.

Before you think a guy like Schultz seems pretty low, he does make sure to remind the Post he has a link to donate to Doctors Without Borders — one of the nongovernment organizations in West Africa helping fight the Ebola outbreak.

For now, there doesn't seem to be much interest in anyone buying the site. Maybe it's that whole "profiting off a deadly disease" thing.