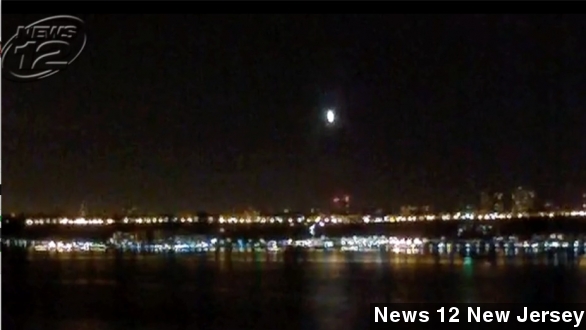 Those living along the East Coast might have seen a large meteor flash across the sky Sunday night.

News 12 New Jersey even managed to capture video of it.

WCAU reported people in Pennsylvania and Delaware also said they saw the meteor.

In fact, Just In Weather, which mapped out where reports of the meteor came from, says it was also seen by people in Maryland, Virginia and even New York City.

The American Meteor Society determined the meteor was "most likely a random occurrence" since there have been no reports of active meteor showers recently.

News 12 New Jersey spoke with an astronomy professor at William Paterson University who said the meteor was traveling up to 100 miles above the planet.

JASON KENDALL: "It probably did not hit the ground, but rather skipped off the Earth's atmosphere."

According to NASA, meteors start out as meteoroids, which are bits of rock floating in space. It's when those pieces fall from space that they're called meteors.

The flash of bright light they create is why they're commonly known as shooting stars.

Experts believe about 10 to 50 meteorites — the debris found after a meteor falls — are dropped on Earth every day. Of course, the majority of these meteorites and their meteors aren't seen because they occur over oceans or uninhabited places.

The operations manager for the American Meteor Society told NJ.com, this is why it's "rare for people to see them because they only last a few seconds. You'll be lucky to see one in your entire lifetime."

It's difficult to predict where you could see a meteor, but there are a few meteor showers that happen every year. If you want to see some shooting stars, head over to The University of Texas McDonald Observatory's website to learn when those meteor showers occur.