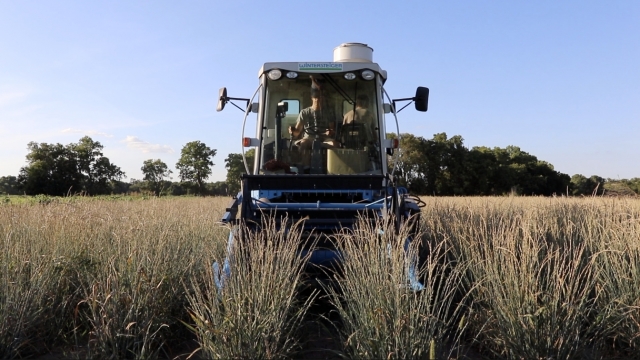 SMS
This Earth-Friendly Crop May Change Agriculture For The Better
By Lauren Magarino
By Lauren Magarino
October 22, 2021
Kernza is a perennial crop that's essentially a cousin of wheat, but its roots store carbon in the ground to help prevent soil erosion and runoff.
SHOW TRANSCRIPT

For those who didn't learn what a perennial grain crop is as a kid, it's like the grass you see on the side of a road that comes back year after year, except it's capable of growing food humans can eat.

The agriculture industry faces an immense challenge. It needs to feed a growing population, but the process of feeding that growing population tends to take an environmental toll on our planet. So scientists are using new technology and innovation to come up with solutions.

Kernza is essentially a cousin of wheat. It tastes sweet and nutty. And its roots store carbon in the ground to help prevent soil erosion and water runoff. Unlike annual grain crops like wheat, oats and corn, Kernza doesn't need to be tilled or replanted every year.

But Kernza wasn't born this way. Lee DeHaan and his team at The Land Institute in Kansas selectively bred it. And if there was an award for best plant parent, DeHaan would win gold.

"I grew up on a farm in Minnesota and I heard about the idea of perennial crops when I was still a kid and wanted to develop a perennial grain crop," DeHaan said. "Every plant gets labeled and identified, and a couple of months ago I took a small piece of leaf and we essentially do '23andMe' for plants."

The process helps predict how each plant will perform, how tall it'll be, how much seed it'll grow and how large its seeds will be.

"Wherever humans have gone and done agriculture, we've seen massive loss of soil carbon and soil quality," DeHaan said. "That carbon is now in the atmosphere, and part of the solution to climate change is to get that carbon back in the soil."

DeHaan says it'll take decades to transform the developing crop from a specialty crop to a large-scale one, but for the plant parent whose devotion has sustained over 20 years, it's a dream DeHaan plans to see through.