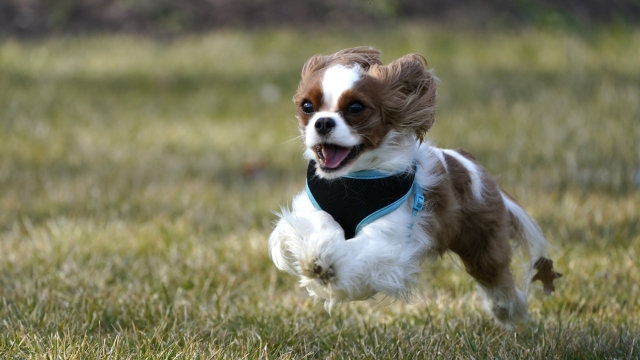 One of them, Billy, has become one of the first dozen pets to be injected with a gene therapy treatment intended to extend dog longevity.

"I was thrilled to get him into the program," Crommett said.

The program, a pilot study, was looking for Cavaliers like Billy with an advanced case of a degenerative heart condition called mitral valve disease. Most dogs of this breed eventually get it. And, in most cases, it leads to death.

That's what happened to one of the dogs Crommett loved most.

"I've got fingers crossed that this works," she said.

So does Noah Davidson. He invented the treatment and co-founded the San Diego-based company, Rejuvenate Bio, to develop and bring it to market.

He thinks that if his gene therapy can reverse the disintegration of a heart valve in Cavaliers, he's got proof of concept that it can do more than that. It could also turn back the clock generally on age-related atrophy to the heart, liver and other vital organs in dogs – and, potentially, in humans.

"It is a software update – if your DNA is your operating system," Davidson said. "And we're uploading a new app that is overexpressing one particular protein that has been shown to be beneficial across numerous different systems in your body."

A number of researchers have demonstrated that gene therapies can substantially extend the average lifespan of a mouse. Davidson said he decided to focus on longevity science while a post-doc at Harvard Medical School after getting a German Shepherd he named "Bear."

Davidson's mentor was George Church – the famed Harvard biologist who's making headlines with his plan to genetically resurrect the woolly mammoth.

"I came up with the idea – along with George's help – to take the genes that we know make mice live longer and turn them into therapies that we can give to older animals," Davidson said.

Church said Davidson's gene therapy in mice "affected so many different things...osteoarthritis, kidney, heart, high fat diet, obesity was reversed, diabetes and so forth. It's all about reversal."

In Cavaliers, the early results are specific to mitral valve disease showing a reversal.

"When we started working on this in mice, we weren't even thinking about mitral valve disease," Davidson said. "So the fact it works means that it lends support to our hypothesis aimed at the general nature of aging rather than a specific organ, a specific mechanism"

And the goal – to do all of that with one shot.

Matt Kaeberlein is a professor of pathology at the University of Washington. He said he's skeptical that Rejuvinate Bio's treatment will generally improve the healthspan of dogs.

"You can say whatever you want, show me the data," Kaeberlein said. "It's possible. But it's also quite possible that it's specific for that particular disease. The vast majority of therapies target an individual disease don’t actually impact the biology of aging.

Kaeberlein is, himself, trying to crack the longevity code. He, too, is leading a clinical trial with people's pets – all types of dogs. Eventually 600 of them. Half will get a medication while the other half gets a placebo.

"The goal of that clinical trial is to determine whether or not the drug Rapamycin can slow aging, increase lifespan and improve healthspan in pet dogs," he said.

Rapamycin is a drug primarily used to prevent organ transplant rejection. Kaeberlein said it can increase the life of a mouse by 30 percent – though scientists aren't sure why.

"It's a three-year study," Kaeberlein said. "And given the size of the study ... we have the statistical power to detect a nine percent change in lifespan — if that's the effect of Rapamycin."

Kaeberlein's study is part of the dog aging project, which with the help of their owners, is tracking tens of thousands of dogs. The goal: identifying how factors like genes, lifestyle, and environment affect the course of dogs' lives.

Rejuvinate Bio is on a faster track.

The company hasn't publicly released data on its clinical trial on Cavaliers, but its CEO, Daniel Oliver, is offering hints to his friends in the Cavalier breeder community.

"We're getting very close to getting this treatment out to the market and animal health and into patients and humans," Oliver said. "We're talking 2023."

Church said, for human trials, they need to choose one disease to focus on in order to get the FDA's green light.

"It could be heart, kidney, diabetes ... You know, it could be anything," he said. "And all you need to do is get one in there and then it can be either used off label or better yet used for clinical trials on each of the other diseases."

As for the dogs, Rejuvenate Bio said 14 have received its therapy and there have been no major side effects.

Crommett told Newsy in early September that after a follow-up visit for Billy, that his heart valve deterioration was reversing. But, then, days later, Billy became sick and on his 13th birthday he passed away.

Crommett and Rejuvenate say Billy's death appears to be unrelated to the gene treatment. Another dog in the trial died of heart failure. A reminder that this remains experimental.

Jason Bellini: "Do you think there's a better chance of allowing dogs to live longer or woolly mammoths to live again?"

Or neither, but it is a moment of once-unimaginable possibility for creatures big and small.