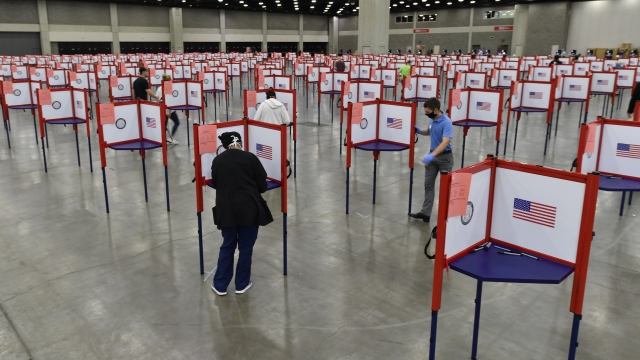 Early results from Tuesday's primaries are indicating some possible changes in a handful of states.

COVID-19 kept many voters at home. With less than 200 polling places open in Kentucky on Tuesday and considerable requests for absentee ballots, it was a tight race between Democrats as to who will go up against incumbent U.S. Sen. Mitch McConnell in November. The New York Times reports that while former Marine pilot Amy McGrath has been leading the state’s primary for months, state Rep. Charles Booker appears to have gained some traction in recent weeks in the aftermath of the deaths of numerous Black Americans killed by police officers.

The Associated Press reports that because of tallying delays linked to the virus, it doesn't expect to call the results of that race until June 30.

Also in Kentucky, U.S. Rep. Thomas Massie, a Republican who forced the House back into session during the pandemic, was nominated for a sixth term, despite receiving backlash from President Trump in recent months.

On the East Coast, voters in North Carolina got behind 24-year-old investor Madison Cawthorn for the 11th congressional district GOP nomination. Cawthorn beat out real estate agent Lynda Bennett, who had the backing of President Trump.

In the 16th congressional district, incumbent Eliot L. Engel is being met with strong competition from Jamaal Bowman, a former Bronx school principal, who has received backing from numerous progressive Democrats.

The New York Times reports that the results of that race and others will also likely not be called for about a week.