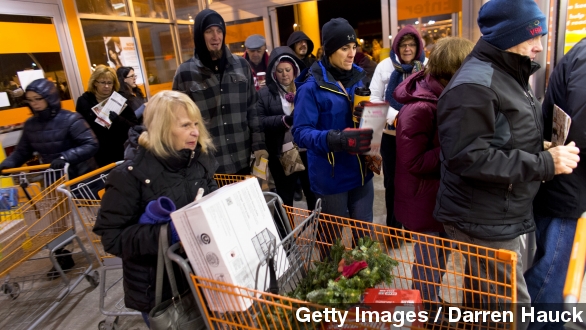 If you went shopping on Thanksgiving or Black Friday, you might have had to fight a crowd or two. But now the numbers are out for weekend sales, and it looks like a lot of shoppers opted to stay home — sales were down 11 percent.

The likely culprit: Thanksgiving sales have gone beyond specific days and instead run through the week of Cyber Monday. That allows a lot of time to get shopping done.

Now, that 11 percent decline is just an average — the overall numbers don't necessarily mean every retailer saw a drop.

Also, a lot of stores are making an extra effort to reach out to online shoppers, offering online sales days before Thanksgiving and way before Cyber Monday.

And according to Shelley Kohan with analytics firm RetailNext, those stores will be the ones that gain the most from this shopping season. "The retailers that have combined their digital and physical presence as part of one overall strategy will be the winners. They got out earlier and won those early sales."

It's still too early to see an average from online sales of Cyber Monday, but it's likely too late for those retailers that saw a significant decrease, as cybersales are expected to see a drop as well.

But if you did plan to cybershop Monday, check out CyberMonday.com for deals on hotel rooms, toys, cameras and lots of other tech.