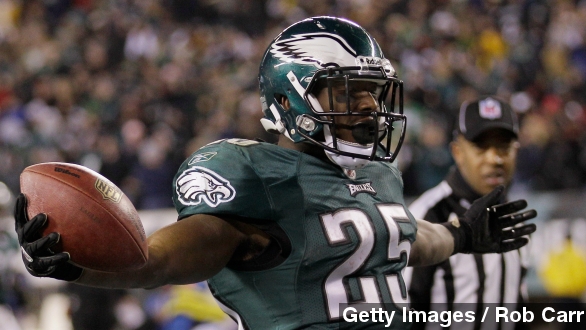 By Cliff Judy
September 9, 2014
A Philadelphia restaurant posted a picture of LeSean McCoy's receipt. Some criticized the millionaire running back while others said it's his money.
SHOW TRANSCRIPT

In a now bizarrely public case of he-said-she-said, LeSean McCoy is now being questioned for his tipping at a Philadelphia restaurant.

The two-dime tip got Philadelphia media's attention Monday night after burger restaurant PYT posted what it called a record-low tip, sarcastically writing on its Facebook page the 20 cents would come in "really handy" when the server wants to buy McCoy's jersey someday.

ROB K'NELLY ON WTXF: "They gave our food runner a hard time, and he went back and they were being rude to him and being rude to the bartender as well."

Deadspin quickly theorized, "Maybe ... the service was (expletive); maybe McCoy just got confused while trying to adhere to the 20 percent rule; or maybe the burgers just weren't craaaaazy enough for him."

For background, PYT advertises its burgers as the craziest in the world. Zagat profiled it just last year for meals like the lasagna burger.

But it appears the burger was plenty crazy and McCoy's math skills are unquestioned. Even the server admitted service could've been better.

While some questioned the receipt's authenticity, the Philadelphia Daily News presented two tweets Monday afternoon, writing reporter Les Bowen confirmed it is real. When Bowen asked McCoy about the tip, the running back said, "It's bull****, man," though he refused to elaborate. Bowen also wrote the tip was for bad service, the Eagles wish he'd handled the situation differently and McCoy understood that.

So now, it seems McCoy is stuck squarely between the camps who believe you do whatever you want with your money and those who say you make seven figures a year ... give the waiter a few bucks.

Again, his money. But for the record, sports contract tracking site Spotrac reports McCoy has a base salary of $7.6 million this season with bonuses upping that to a total compensation of $9.7 million.