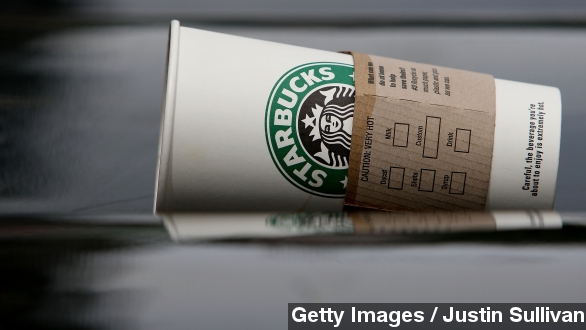 Starbucks is in hot water in Europe.

GEOFF CUTMORE VIA CNBC EUROPE: "The E.U. says the tax deal struck with Dutch authorities may be illegal, as the world's largest coffee chain faces criticism for unfair advantages."

Under a European Commission investigation, Starbucks could be forced to repay more than 10 years of back taxes in Holland.

But the total amount would be less than 20 million dollars. That's not an enormous sum for a company like Starbucks.

Forbes contributor Tim Worstall writes, "This is all over arcane details: no one at all is trying to say that the company has been running away over the hills with vast amounts of money that rightfully belong to the taxman."

Actually the Starbucks probe is part of a wider investigation by the European Commission that also includes tax deals Ireland made with Apple and Luxemburg made with car company Fiat.

And really the investigations seem to be less about the mutlinational companies and more about the European countries who grant the companies what some call "sweetheart" tax deals.

Tax evasion has long been a source of in-fighting within the EU, with countries enticing companies and even individuals to move inside their borders with reduced tax bills.

As The New York Times noted in 2007, members of The Rollings Stones and U2 had moved their money to the Netherlands to significantly lower their tax rates.

And the new European Commission President Jean-Claude Juncker himself has come under fire after leaked documents revealed Luxemburg, where he served two decades as prime minister, helped hundreds of companies reduce their tax loads.

Juncker denied any wrongdoing and pledged he would seek to fight tax evasion in the EU while speaking to reporters at the G20 summit where the topic was on the agenda. (Video via BBC).

Both Starbucks and the Dutch government have also denied any wrongdoing. Both issued statements this week refuting that their tax arrangement violated any laws.