E-Cigarette Use Can Damage Your DNA, Study Finds 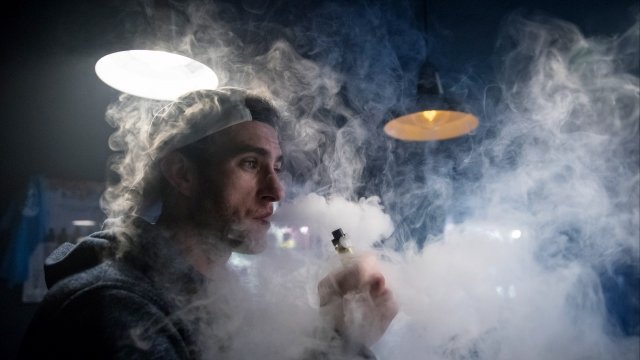 SMS
E-Cigarette Use Can Damage Your DNA, Study Finds
By Tyler Adkisson
By Tyler Adkisson
August 20, 2018
Researchers think that in some cases, vaping could cause damage that may later develop into cancer.
SHOW TRANSCRIPT

E-cigarettes have become popular among smokers who see vaping as a safer alternative. The long-term health effects of vaping are still somewhat unclear, but scientists are learning more about at least one danger: Much like traditional cigarettes, e-cigarettes can potentially damage users' DNA.

Researchers examined the saliva samples of five e-cigarette users before and after they vaped for 15 minutes. They discovered four of the five users had increased levels of three different DNA-damaging compounds in the cells of their mouths.

This kind of damage is known as a "DNA adduct," which is when toxic chemicals break down pieces of DNA and attach themselves to the strands. Our DNA can fix these mutations on its own, but if the mutation survives when the cell divides, it can lead to cancer.

This study adds to a growing body of research that shows e-cigarettes can increase cancer risk. An earlier study had similar findings: The chemicals in e-cigarette vapor caused DNA strands to break.

But as researchers in the field will tell you, there's still a lot left to learn.

First, five people is a small sample. The team plans to run a larger study with more subjects. It also plans to examine how the levels of DNA-damaging chemicals in e-cigarettes compare to those in traditional tobacco cigarettes.