Dzhokhar Tsarnaev's Legal Battle Is Far From Over 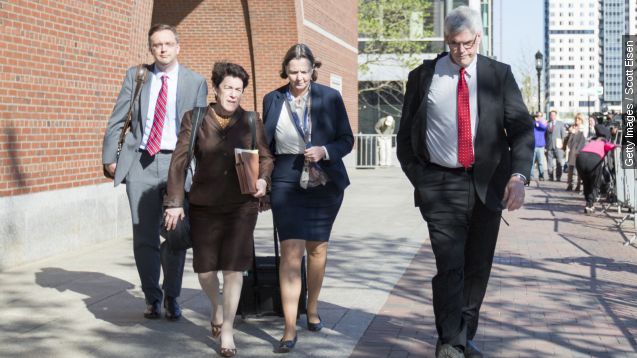 Although a jury has sentenced Dzhokhar Tsarnaev to death, practically speaking, he could very well be getting life in prison. (Video via FBI)

Or something close to it. That's because it’s pretty rare for a federal death sentence to be carried out.

According to the nonprofit Death Penalty Information Center, of the 74 federal inmates sentenced to death since the death penalty was reinstated in 1988, just three have been executed.

Oklahoma City bomber Timothy McVeigh eventually gave up on his appeals and was executed in 2001. So was drug trafficker Juan Raul Garza that same year and convicted rapist and murderer Louis Jones in 2003.

Of the remaining 71 defendants, some had their cases vacated and some died in prison. Others are appealing their sentences.

There’s the next step for Tsarnaev, whose father told ABC after the sentencing, "we will fight until the end."

And as with any death penalty case, Tsarnaev will automatically get a direct appeal. Should that fail, his lawyers could file any number of post-trial motions, and in doing so, keep his name in the headlines. Which is why many, including family members of the youngest victim, had called for a life sentence over the death penalty.

Martin Richard was 8 years old when he was killed by the second explosion while watching the Boston Marathon with his family.

His parents wrote in an op-ed for The Boston Globe, an appeals process would "prolong reliving the most painful day of our lives. ... As long as the defendant is in the spotlight, we have no choice but to live a story told on his terms, not ours.”

Even if there were no appeals, the federal government wouldn't execute Tsarnaev right away. The Justice Department placed a moratorium on the federal death penalty in 2011 while it reviewed the policy.

As for Tsarnaev's immediate future, the judge in his case must still formally impose his death sentence, although that could be months from now.