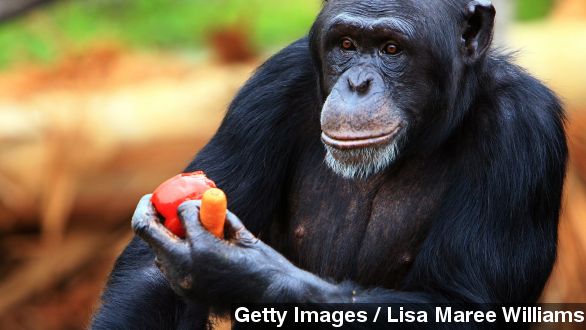 It's been a long-held belief that humans were unique for our ability to learn a foreign language, but a new study says one of our closest ancestors might be challenging that theory.

When a group of chimpanzees was moved from a zoo in the Netherlands to one in Scotland, researchers found the traveling chimps assimilated the dialect of the ones already living in the Scottish zoo. (Video via Edinburgh Zoo)

Scientists studied the chimps over a three-year period and discovered the foreign chimps added some bass to their grunts over time when calling for a specific object. In this case: an apple. (Video via YouTube / Erin Galbraith)

The researchers say this is a pretty big deal because it's the first time scientists have heard a primate species other than humans do something like this.

One of the study's co-authors, University of Zurich's Simon Townsend, says, "These findings might shed some light on the evolutionary origins of these abilities. The fact that both humans and now chimpanzees possess this basic ability suggests that our shared common ancestor living over 6 million years ago may also have been socially learning referential vocalisations."

The scientists are still curious as to why the tone of the chimps' grunts changed, but they say the relationships formed and the desire to fit into their new social circle could both be factors.

Still, one Wisconsin zoology professor is skeptical of the findings because of how long the study took. He's quoted in the Los Angeles Times as saying, "The slow pace of social integration reported suggests that these calls are really about affiliation and not about semantics."

Meaning, according to him, the chimps only shifted their grunt tone because the other chimps were doing it, and they're not necessarily picking up a new language.

This also isn't the first time scientists have tracked chimps' learning patterns. In 2011, a study suggested that chimps's genetic makeup was setup to evolve language.

The new chimpanzee study was published in the journal Current Biology.