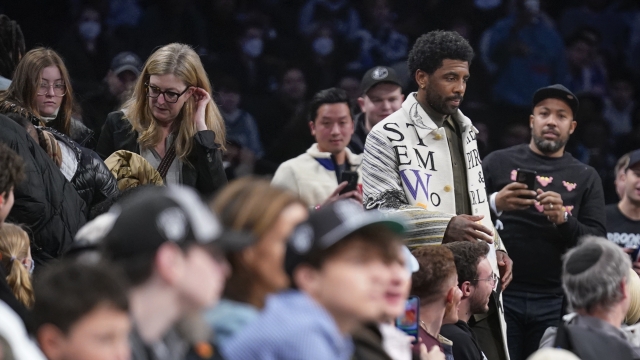 Kyrie Irving was a spectator at Barclays Center for the first time this season Sunday.

Kevin Durant is calling on New York City Mayor Eric Adams to figure out what the Brooklyn Nets feel is a confusing vaccine mandate that now allows Kyrie Irving to attend but not play in their home games.

Irving was a spectator at Barclays Center for the first time this season Sunday, sitting across from the Nets bench for Brooklyn's 110-107 victory over the New York Knicks. Durant scored a season-high 53 points, then took aim at Adams with his postgame comments, even saying the mayor just wanted attention.

"It's ridiculous. I don't understand it at all," Durant said.

Irving has been unable to play this season because he is not vaccinated against the coronavirus. Up until this week, proof of vaccination was required for fans to attend an event in the arena.

Though that mandate has been lifted, there is still one in place for those working at the arena. The Nets were already aggravated because that didn't apply to visitors, allowing an unvaccinated opponent to play when Irving couldn't. They seemed even more frustrated after Sunday's game, when Irving's arrival created a scene at a nationally televised game.

Durant kept referring to Adams, who took office in January, by his first name.

"But he'll figure it out soon. He better. But it just didn't make any sense," Durant said. "Like, there's unvaxxed people in this building already. We got a guy who can come into the building — I guess, are they fearing our safety?

"Like, I don't get it. Yeah, we're all confused. Pretty much everybody in the world is confused at this point. Early on in the season people didn't understand what was going on but now it just looks stupid. So hopefully, Eric, you got to figure this out."