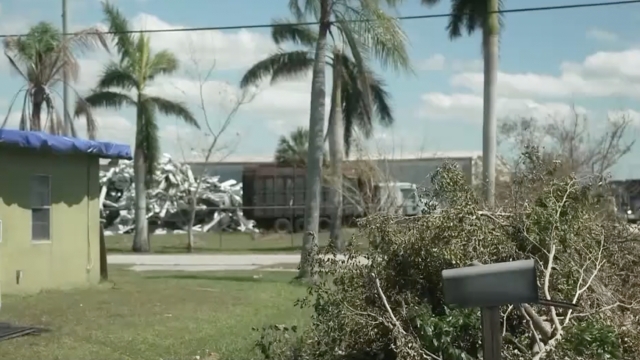 A massive tree tipped over from the aftermath of Hurricane Ian is still taller than Stephanie Stephens' house. She weathered Hurricane Ian inside her home — as it was battered by winds.

"That tree is more than 70 years old. So I asked my mom when it fell. I said, well, did y'all plant this or was it here when we had the house built? Our house was built in '62. We were the first concrete block house on the street," said Stephens. "I understand about the outage. I do, because there are people way worse off than us. My concern is that my oak tree is wrapped around our place, our land, and it's here. We own this house as well. But these were sparking in the storm. But since we have no power and it's not safe to assume anything, that the lines are dead."

She said she's been calling the power company since last Thursday for help in dealing with the downed tree and power line, and says she can't help but feel a little bit ignored.

85 year old Archey House also has a downed tree on his home.

"It was something. I didn't know whether we'd get a tornado or what, it seemed like the whole Earth was shaking at one point," said House.

The Dunbar neighborhood, in northeast Tampa, Florida, is predominantly Black and also in need of disaster response.

This isn't Rayner's constituency, but she gathered water and essentials, then drove down from St. Petersburg, distributing aid to the distressed.

"We have to make sure that we're doing this work intentionally. You know, there has to be recovery for everyone. And what I saw in Harlem Heights was devastating. What I'm seeing here is devastating," said Rayner.

"I really want my lights back on right now. I've not been through anything like this," said Ruby Jones, a Fort Myers resident.

"You can see all the debris that need to be removed, but people are having problems getting food, getting water, ice and all of that into the area," said Brown.

Dunbar gets its name from poet and playwright Paul Laurence Dunbar. In the Jim Crow South, Black entrepreneurs built communities and businesses.

"Right down on MLK and Cranford, it is now deemed historical. It was a nightclub. And I mean, all the stars would come, you know. And my mom said it was like a juke joint," said Stephens.

The people of the Dunbar neighborhood tell Newsy the historical demarcation line between Black & brown and White was always the railroad tracks. And there was a time when minorities didn't dare cross the tracks after sunset.

"You didn't cross over because you didn't know what was going to happen. It wasn't safe. You know, they were when I even when I was in high school, there was restaurants downtown that had the colored only or White only. Yeah. Water fountains," said Stephens.

Now the neighborhood waits for help, as a historical reminder there's work to be done.