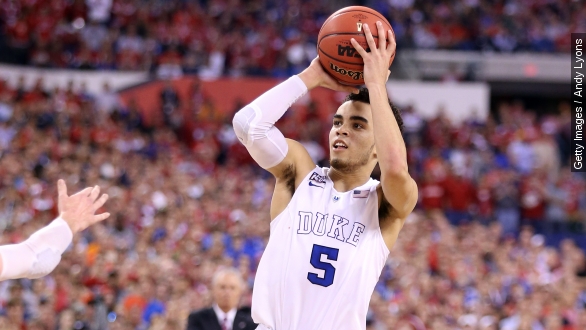 Two offensive powerhouses collided, but only one was left standing. The Duke Blue Devils have defeated the Wisconsin Badgers to win the NCAA Championship.

The Blue Devils beat the Badgers 68-63 lead by a strong performance from Tyus Jones who dropped 23 points and hit 7-for-7 from the free-throw line. He scored 19 of Duke's 37 second half points.

With the victory, Coach Mike Krzyzewski's young squad captures the school's fifth NCAA Men's basketball title — all under his direction. That ties the school with Indiana and North Carolina for third on the all-time list behind Kentucky with eight and UCLA with 11.

That's not to take anything away from Wisconsin. The Badgers rolled through earlier rounds with stellar performances from breakout sharpshooter Sam Dekker and Player of the Year front-runner Frank Kaminsky.

Plus, years from now, this season's Badgers class will likely still be remembered as the team that stunned the basketball world by spoiling the Kentucky Wildcats' chances at a perfect season in the Final Four.

As for the Blue Devils, the team swept through the NCAA Tournament with high-powered offense, lead by a strong backcourt and one of the most dominate players in the paint, Jahlil Okafor.

But, surprisingly, it was also their tough defense that really helped them coast to the championship.

The victory also marks the first time Coach K and the Blue Devils have ever knocked off a No. 1 seed to win the NCAA title. Over the past three decades, the team failed four times in the same situation.