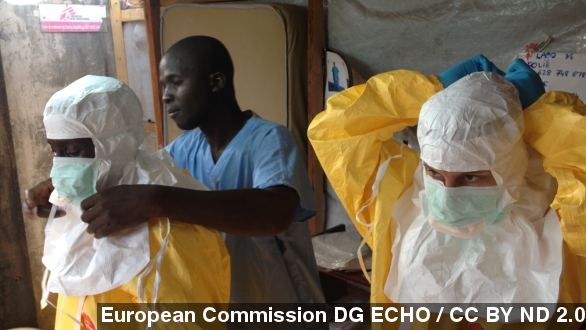 By Mikah Sargent
August 21, 2014
An experimental drug used to treat Marburg virus in rhesus monkeys could give new insight into a similar treatment for Ebola.
SHOW TRANSCRIPT

Our biological relatives might have answers in the search for a cure for Ebola, which has claimed the lives of more than 1,300 and infected nearly double that number.

According to a new study published in the journal Science Translational Medicine, 16 rhesus macaque monkeys survived a Marburg virus infection — a disease "closely related" to Ebola — thanks to a new experimental treatment.

​While we've seen several experimental drugs, NBC reports this one is unique because of its efficacy. It's "the first time such a drug has been shown to work so many days after infection." Some of the macaques didn't receive the drug until three days afterward.

And that's why the drug could be useful: Many are unaware of an Ebola infection until it's too late.

While it's true the drug was used for a "cousin" of Ebola — Marburg virus — the company behind the treatment is also working on a drug for Ebola. It's one that's "been fast-tracked by the Food and Drug Administration," according to NBC.

Despite promising results, one doctor quoted by The Washington Post cautioned, "It would be a mistake for people in those countries to think that these drugs are going to be available in large enough quantities to alter the course of this outbreak."

He told the outlet "adherence to traditional public health measures" is the best way to get the outbreak under control.

Another drug being used in the treatment of Ebola has proven effective. ABC reports Dr. Kent Brantly and Nancy Writebol — two Americans who contracted Ebola — will be released from the hospital after being treated with ZMapp.