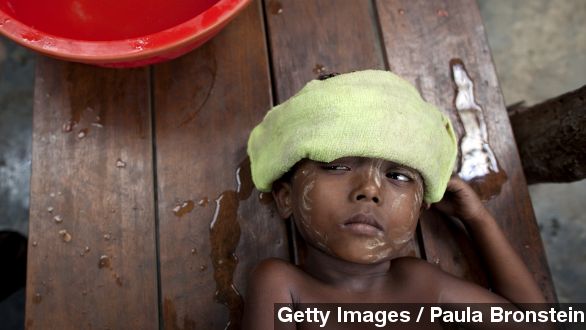 SMS
Drug-Resistant Malaria Strain Alarms Researchers
By Jasmine Bailey
By Jasmine Bailey
February 21, 2015
The main drug used to treat Malaria has shown to be ineffective in a recent strain found in Myanmar. Doctors say it's spreading at an alarming rate.
SHOW TRANSCRIPT

Researchers have voiced a new concern about malaria — the mosquito-born disease that could be deadly if not treated.

And that's just the concern  — treatment. According to a recent study a drug-resistant strain of the illness has been spreading through Myanmar and bordering countries.

"Resistance to nearly all majorly antimalarial drugs started in these poorest boarder areas. No one knows quite why, but migrations, conflict, poverty and fake drugs have probably all played a part," reports NBC.

Authors of the new study, published in The Lancet, say the drug-resistance strain is spreading and researchers are calling it a disaster in the making.

Writing, "The pace at which the geographical extent of artemisinin resistance is spreading is faster than the rate at which control and elimination measures are being developed and instituted, or new drugs being introduced."

Artemisinin is the drug that doctors have relied on to cure malaria, and while treatment used to take just 24 hours, it now takes days. Signs of resistance to the drug have slowly become more prominent over the last decade or so.

According to The New York Times, we've been through this with the malaria virus before. Artemisinin is showing a similar pattern to drugs "like chloroquine. Such drugs were, in their time, mainstays of malaria treatment but are no longer considered useful because the parasite became resistant."

As of now, treatment is working when other drugs are used in combination with artemisinin. But as Dr. Charles Woodrow, who was involved in the study, told NPR introducing those supplementary drugs could add to future problems.

"If the parasites were to evolve in a way that made them entirely resistant to artemisinins, this would be disastrous over a short time scale. Because you'd be left with the remnants of all the other drugs we'd tried to use in the past."

That's what Woodrow calls the nightmare scenario; but it's not something we need to worry about just yet. Best case scenario — researchers will be able to develop a new treatment, as they have in the past.

The current resistant malaria strain is known to have spread from Myanmar to parts of Cambodia, Laos, Thailand and Vietnam.

Globally, some 600,000 people die from the Malaria every year.