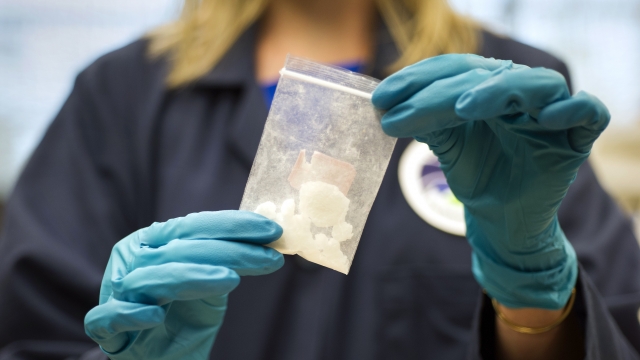 SMS
Drug Harm Reduction Programs Could Help Weaken The Fentanyl Crisis
By Sam Eaton
By Sam Eaton
March 31, 2022
On the streets, fentanyl is replacing heroin as the dominant opiate among drug users, but harm reduction programs could help lessen its use.

Walk a few blocks in downtown Seattle and the fentanyl crisis is hard to miss. Scorched foil, used to smoke illicit fentanyl pills, litters the streets where drug deals and drug use happen in broad daylight.

Overdoses from the powerful synthetic opioid set a record in King County in 2021, killing at least 709 people, which is up from 511 the year before.

Will, who is homeless and says he’s an addict, holds a strip of foil with a tiny blue fentanyl pill inside. He says these "blues," as they’re called on the street, are the only opioid he can get his hands on right now.

That comparison to the nicotine in cigarettes isn’t far off when it comes to how fentanyl is being used. The University of Washington School of Medicine’s Caleb Banta-Green researches drug use and addiction.

"I mean, imagine how a person smoked cigarettes; that same frequency, now a person is using fentanyl," Banta-Green said.

He says with heroin, someone might use four to six times a day, but with fentanyl, people are using 10 to 15 times a day.

It's an addiction that sets in in a matter of weeks compared to the months or years it takes to become addicted to black tar heroin. This helps explain the rapid shift in fentanyl use and overdoses Banta-Green has documented in a newly published health survey of drug users in Washington state.

"The big kind of standout number is in 2019 about 18% of people say they use fentanyl," Banta-Green said. "In 2021, it was 42%, and 14% said they used fentanyl near daily. So we're seeing a much larger proportion, higher overdose rates, which matches what we see, unfortunately, in overdose deaths, so that's just a huge transformation."

Banta-Green has researched drug addiction for 27 years and calls it the biggest, fastest and most lethal shift in substance use he's ever seen.

In the U.S., drug overdose deaths reached a staggering 100,000 people last year, with fentanyl accounting for 64% of those deaths. That’s roughly 175 Americans dying from an overdose every single day, and according to the most recent data, many states across the country, including Washington, are seeing record surges in overdose deaths.

"The challenge with fentanyl is that it might be four times more fatal than heroin, so that means we need a rapid expansion and really an emergency response to what we're seeing," Banta-Green said.

That response has yet to materialize.

The front line in the addiction crisis is a mobile needle exchange, representing the most in need and difficult to treat for addiction and mental health. And with only limited resources, organizations like it simply don’t have the capacity to deal with this growing crisis.

"For a lot of the folks that come in through here, this is certainly the only engagement point they have with the public health infrastructure of any kind," LaKosky said.

LaKosky and his team meet regularly to share updates on clients who are trying to rebuild their lives from one of addiction and homelessness.

The organization is part of what’s called a low-barrier “harm reduction” approach to the drug crisis.

"It's the building of relationships with people so that when they decide they want to get help, they know where to come, and harm reduction is really rooted in absolute non-judgment of people for their behavior," LaKosky said.

LaKosky’s Tacoma Needle Exchange Initiative is also at the forefront of a more controversial service, distributing safe smoking equipment in order to reach the huge number of fentanyl users who don’t use needles.

The issue boiled to the surface in February when a $30 million federal harm reduction grant program to address the overdose epidemic listed “safe smoking kits” in the list of supplies it would fund — a move that attracted responses like this one from Sen. Marco Rubio:

"The Biden administration is going to be sending crack pipes and meth pipes targeting minority communities in this country, underserved communities," Sen .Rubio, (R) FL, said. "This is insanity. This isn’t even about liberal and conservative anymore, this is about crazy versus normal, insane versus common sense. Where does this end?"

The White House responded by saying pipes were never a part of the safe smoking kits they were funding. Caleb Banta-Green says the claim that distributing safer smoking equipment enables and even promotes drug use is an understandable first reaction, but he says it’s also incorrect.

"They're already doing those things, so that already exists," Banta-Green said. "Right now, the choice is, do we continue to let that happen in isolation where there's a lot more disease and death? Or, do we actually provide safer equipment to bring people sort of out of the shadows literally and figuratively, and start engaging with them and offer them, hopefully, some off ramps from some behaviors that they would like to get under control? They don't have all the tools they need to and we can help support them in that."

Banta-Green says his recent survey found that roughly half of fentanyl users only take the drug by smoking it, meaning a huge number of drug users at risk of a fentanyl overdose have no reason to engage with harm reduction services when the primary focus is people who inject drugs.

This is why the Dave Purchase Project in Tacoma continues to distribute free glass pipes to drug users in spite of the controversy.

The group brings its services directly to homeless encampments, offering everything from condoms, fresh socks and wound care, to detailed instructions on how to administer a life-saving naloxone kit to reverse an overdose.

"These are people's children, these are people's brothers, sisters, aunts, uncles, parents, grandparents," LaKosky  said. "In some cases, they're human beings, and they're worthy of human dignity. And because they have it, because they may be in a chaotic drug use spiral, doesn't mean they're any less human — it means they need more help."

As the overdose numbers continue to rise, so does the divisiveness over what constitutes help, with many considering harm reduction too permissive. But LaKosky says the hundreds of billions of dollars spent on drug enforcement, incarceration and for-profit treatment hasn’t worked. He says in 1971 when President Nixon declared the “war on drugs,” he was in elementary school.

In the meantime, illicit fentanyl is flooding the streets, taking lives at record rates.

Will says he’s never gone to a needle exchange or harm reduction program since he only smokes fentanyl, but every time he brings his lighter to a strip of foil, he’s essentially rolling the dice in a rigged game where the odds aren’t in his favor — a game that ends with so many fentanyl users like him becoming just another statistic in the overdose crisis.