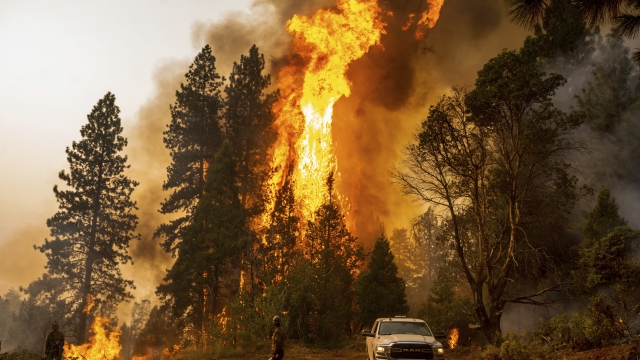 Winter is likely to bring drier conditions across Southern states and wetter weather for areas including the Great Lakes region and Pacific Northwest.

La Niña, a weather pattern characterized by cold ocean temperatures in the equatorial Pacific Ocean, is returning for a rare third winter, officials with the National Oceanic and Atmospheric Administration said. That means December, January and February are likely to bring drier-than-average conditions across the Southern states and wetter-than-average weather for areas including the Great Lakes region and Pacific Northwest.

The forecast means droughts that have punished the Great Plains and Western states are likely to continue, the agency said. Wildfires will remain a risk, and some parts of the country will likely be in greater danger than before, said Brad Pugh, the operational drought lead with NOAA's Climate Prediction Center.

With more climate extremes on the horizon, how much will the issue of climate change affect votes in upcoming elections?

“One of the areas, over the next couple months, that is likely to have enhanced wildfire danger will be the south-central U.S. — Arkansas, Oklahoma, Texas,” Pugh said. “Very dry conditions there. With that dryness, that will be an area for high wildfire danger in the coming three months.”

Drought conditions are going on across about 59% of the country, NOAA officials said, and they have persisted in the Western states since late 2020. The continued La Niña climate pattern means that is likely to expand to the Gulf Coast as well, NOAA said.

The Gulf Coast is also one of the parts of the country likely to experience higher-than-average temperatures, NOAA said. The higher temperatures are also likely to climb up the East Coast all the way to the New England states, the agency said.

Some parts of the Northern U.S., including the Pacific Northwest and portions of the Great Lakes states, could see colder temperatures than usual, NOAA said.

“I would definitely lean on a milder winter, especially east of the Rockies,” Cohen said. “Wetter to the north, drier to the south.”

Scientists say the exceptionally hot year is part of a long-term warming trend that shows hints of accelerating.

The southern Rockies, southern plains and most of the southeastern states are also looking at drier-than-average conditions, NOAA officials said. The winter weather is also expected to bring drought to the middle and lower Mississippi Valley, they said.

Drought has had major consequences in states like California in recent years, including hurting agriculture operations, spurring water use cutbacks and elevating the risk of wildfires. NOAA's prediction does call for improved conditions in some drought areas, including parts of Montana and Idaho, but predictions call for a deepening drought in many others.

NOAA's forecast is similar to projections from computer-based models, said Ryan Maue, a private meteorologist based in Atlanta. Many parts of the country that could use a wet or snowy year are unlikely to get one, he said.

“I think the bottom line is we're on a continuation of what we've been seeing over the last year, including last winter, and there's not expected to be improvement in the drought situation across California and the center of the United States,” Maue said.