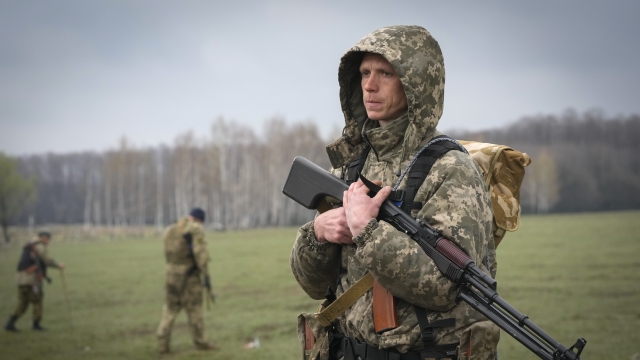 But Ukraine is leveraging one of its few advantages in terms of weaponry: Superior drone technology.

From the early days of Russia's invasion, Ukraine showed the world that it could use drones.

At the start of the war, the Turkish-made Bayraktar TB2 drone was used to attack Russian forces. It was so effective, a Ukrainian folk artist even made a song about it.

Now as Russia's most elite troops move to the Donbas region of eastern Ukraine, Ukraine's drone force could play an even more critical role. In particular, so-called "Kamikaze drones" provided by the U.S. that are sent on one-way trips across enemy lines.

Developed for use by U.S. forces in Afghanistan, the switchblade allows the controller, from a distance, to home in on a target and strike.

Ukraine's president, Volodymyr Zelenskyy, was initially elated to receive a batch of 100 switchblades. Easy to transport and relatively easy to learn how to use, they were so effective at taking out Russian artillery that Zelenskyy demanded more.

In early April, the Pentagon obliged, saying Ukraine would get a total of 700 of them.

Now the U.S. is fast-tracking delivery to Ukraine of a secretive new drone called the "Phoenix Ghost." The specs are top secret but it is considered similar to the Switchblade drone.

The Pentagon's spokesperson says the Phoenix Ghost drone's primary focus, like the Switchblade, is attack.

"On the Phoenix Ghost, this is a drone that had been in development before the invasion. Clearly, the Air Force was working this and in discussions with the Ukrainians again about their requirements. We believed that this particular system would very nicely suit their needs, particularly in eastern Ukraine," U.S. Pentagon Press Secretary John Kirby said.

"If Ukrainian army receives such weapons, our officers and soldiers from air defense forces of Ukraine will quickly master those weapons and they will be used according to their purpose where we need them," Motuzyanyk said.

Ukraine needs all the help it can get as Russia concentrates its forces in eastern Ukraine with what could be overwhelming firepower.

To be sure, the Russian military has drone power as well.

But, according to a report from engineering experts, "sanctions imposed after the 2014 invasion of Crimea blocked the Russian military from procuring some of the technology necessary to stay on the cutting edge of drone development."

The Pentagon is keeping the capabilities of the Phoenix Ghost under wraps. Russian forces may be among the first to find out.