Apartheid Lingers In South Africa, And These Drone Pics Prove It 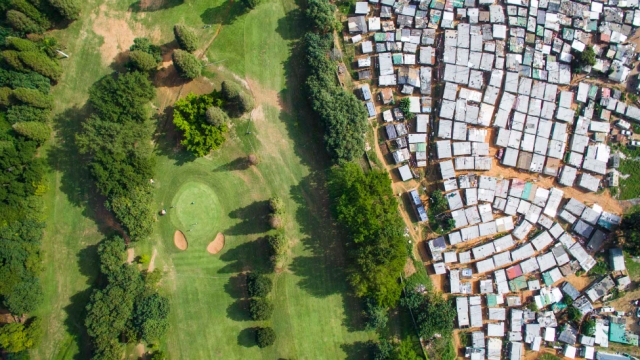 "It took flying a drone 300 meters above people to completely erase humans from the photo to get people to pay attention," photographer Johnny Miller said.

Miller is a U.S. photographer living in South Africa. He took aerial photos to show the extreme disparities between South African cities.

The government is trying to fight against these disparities, but it means having to rework roads, power lines and public transportation.

"I think I initially tried to distance myself from being an activist because I wanted to present the images very objectively, and I think that was a good technique to get people to listen to me because I'm a) foreign; b) privileged; and c) white," Miller said.

"Until you go into an African ... urban slum and see the conditions there, you don't understand how bad it actually is. It's much, much, much worse than anything in the States. It is completely devoid of service, of sanitation, oftentimes of electricity, even. High crime, high disease. The worst thing of all is the hopelessness — that nothing is going to get better," he said.

Whites are among the minority, but one report says that group's income is eight times more than the average.

Miller said he plans to repeat the project in other countries like Mexico, India and the U.S.

"I believe the status quo — not only in South Africa but around the world — is untenable. The oppression, the economic disenfranchisement that so many people around the world are experiencing just can't last," Miller said.