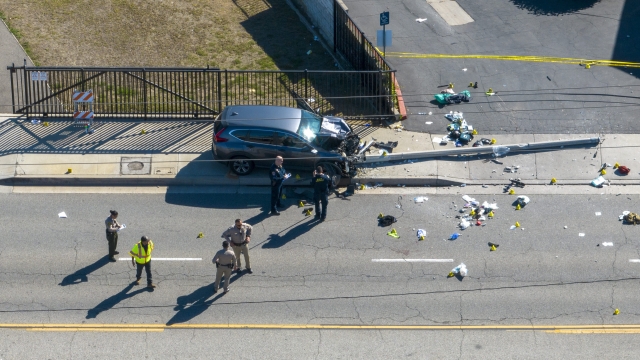 During a routine run near Los Angeles, a car veered onto the wrong side of the road and plowed into a formation of 75 sheriff's recruits.

Near Los Angeles Wednesday, a morning training run turned into a tragedy when a wrong-way driver plowed into a group of Los Angeles County Sheriff's Department recruits, injuring 25 people — five of them critically.

"It's a tragic event, very traumatic for all the people involved," Los Angeles County Sheriff Alex Villanueva said. "The deputies at the front of the formation could see the vehicle coming, and they were able to get out of the way. But the people that were behind the ones in the front could not see what was in front of them, and those are the ones that were not able to get out of the way and took the brunt of the impact."

Villanueva called the horrific scene a mass-casualty event — the likes of which he'd never seen in his career.

"As soon as the accident happened, the chaos that ensued — said it looked like an airplane wreck," Villanueva said. "There were so many bodies scattered everywhere in different states of injury that it was pretty traumatic for all involved."

"The fire station — which was only about 500 feet away from this tragic accident scene — the deputies came and knocked on the door and requested their assistance," said Anthony Marrone, Los Angeles County Fire Department chief.

Now as several recruits will likely have life-altering injuries, officials are heralding the quick thinking that may have kept them alive.

"It's my understanding that the sheriff's department took the four most critical patients to the hospital immediately before the paramedics squads arrived, probably saving the lives of those sheriff recruits," Villanueva said.

A deputy used his knee against the head of an inmate to restrain him, and internal documents show the sheriff's department tried to cover it up.

The 22-year-old driver was arrested at the scene and taken to a hospital, where he tested sober on a sobriety test.

"The range of injures we have: obviously head trauma, we have broken bones, we've had some loss of limb," Villanueva said.

"There was a light pole on the east side of the street, and the one thing that was relayed to me was, 'Thank god for that light pole,' because the vehicle ultimately hit it and stopped as opposed to possibly hitting more recruits," said Pat Macdonald, Los Angeles Sheriff's Department Training Bureau captain.

Sheriff's department leaders say recruit runs in the area near Los Angeles are common and have happened frequently since the department moved into the area in 1982.

"The unincorporated area of Whittier is very familiar with the recruits running on the roads; there's several routes that are taken," Macdonald said.

The cause and/or motive are unknown. It's not clear if the recruits were targeted, but the California Highway Patrol is investigating what happened.

"Lord willing, they'll be able to recover, all of them, even the one who is currently in the most critical state at St. Frances, but they're just gonna have a long road to recovery," Villanueva said.