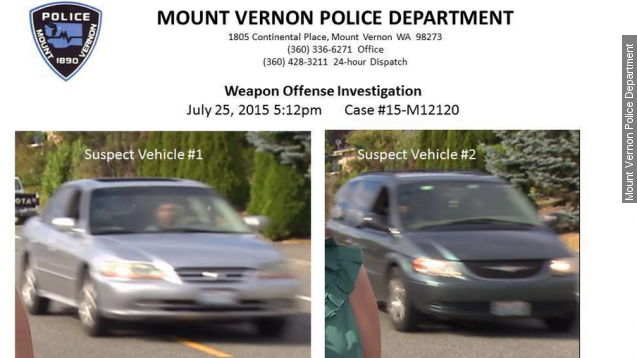 KOMO reporter Kara Kostanich was reporting from Mount Vernon Saturday, when two cars sped by, and then shortly after, you hear the gun shots.

Kostanich told KOMO, "Of course my immediate reaction was just to get down. ... I ran around the front of the Explorer, got in the passenger seat and ducked under the dashboard."

Around the time of that incident, Kostanich retweeted the breaking news story and said it happened steps away from their live shot and that they were trying to get a police escort out of the area.

Nobody was reported injured, but this is just one of a recent string of drive-by shootings in Mount Vernon within the past month.

There have been multiple incidents of gunshots damaging homes.

"I just don't know why. It's been really hard to sleep since then," said Amanda Carreon, as she stands in front of the bullet holes in her house.

And last week, two people lost their lives in another drive-by shooting.

The shootings have even left local officers on edge.

Chris Cammock of the Mount Vernon Police Department told KIRO, "We don't usually experience something like this, and that's what's a little bit troubling about it."

Detectives on the case are checking to see if these incidents are connected. The local police department has received quite a few tips about this most recent drive-by but are still looking for the drivers.