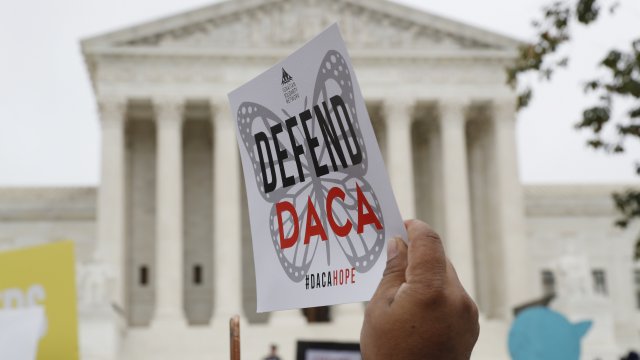 SMS
'Dreamers' Tell Supreme Court Ending DACA Now Would Be 'Catastrophic'
By Ben Schamisso
By Ben Schamisso
April 8, 2020
Around 27,000 DACA recipients work in health care, many of them on the front lines of the battle against the coronavirus.
SHOW TRANSCRIPT

Dreamers and their advocates are urging the Supreme Court to consider the new reality of the pandemic before ruling on the legality of DACA. That's the Obama-era program that shields from deportation nearly 700,000 undocumented immigrants who came to the U.S. at a young age.

"It wouldn't make sense to take away a huge chunk of first responders and health care workers in our country," said Jirayut "New" Latthivongskorn a DACA recipient and plaintiff.

Around 27,000 DACA recipients work in health care, many of them on the front lines of the battle against the coronavirus. Lawyers representing Dreamers recently wrote to the court that ending DACA during "this national emergency" would be "catastrophic."

"Resident physicians, along with nurses and many other healthcare workers are dying, you know, it is real, it is upon our doors. And yet DACA recipients refuse to let that deter us from our mission," Latthivongskorn said.

As a family medicine resident at a San Francisco hospital, he's currently helping take care of patients, including those with COVID-19 symptoms.

"We are all at risk for being exposed. And then we are exposing one another just by way of continuing to come to work and continuing to take care of as many patients as possible," Latthivongskorn said.

He's been living in the U.S. since he was 9, when his family brought him from Thailand on a tourist visa. They never left. Last year, he became the first undocumented student to ever graduate from the medical school at the University of California, San Francisco. But he'd lose his job and deportation protection if DACA goes away.

"All of that goes out the window the minute DACA is not around," Latthivongskorn said

Based on how justices questioned both parties last November, analysts believe the Supreme Court will allow President Trump's administration to strike down DACA. Ilya Shapiro of the libertarian Cato Institute says the pandemic may delay that decision but probably won't change it.

"I don't think the Supreme Court should do anything different than what it would have been otherwise. You know, the law is the law and the law doesn't change in an emergency," Shapiro said.

President Obama created DACA in 2012 without the approval of Congress. And Shapiro argues that giving the temporary program the full force of law would set a dangerous precedent that future presidents could abuse.

"If President Obama is to be believed, he said he wasn't changing the law, he was using his discretion. Well, the next president to come along can similarly then be able to use his discretion to rescind that," Shapiro said.

Bipartisan efforts to legalize the status of Dreamers have failed multiple times in the past. But Shapiro and DACA recipients hope the pandemic could be a game-changer.

"I hope that they see that this is just another example as to why DACA recipients and our immigrant families deserve to be able to stay here," Latthivongskorn said.