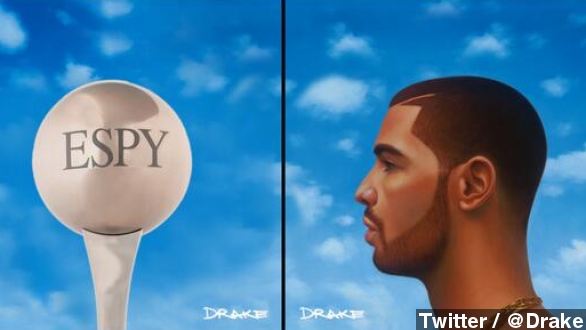 By Danny Matteson
April 9, 2014
In a tweet Wednesday, rapper Drake said he was honored to be hosting this year's 22nd annual awards.
SHOW TRANSCRIPT

​I guess you could say “he made it” — at least to an ESPY’s hosting gig, that is.

In a tweet Wednesday, rapper Drake announced he was “honored” to be hosting this year’s 22nd annual sports awards and posted this golf-themed parody of the cover of his 2013 album “Nothing Was The Same.” (Via Twitter / @Drake)

ESPN confirmed the announcement in a press release, calling Drake an “unbelievably talented entertainer.” It quotes Drake saying, “This is an incredible opportunity for me to combine two of my biggest passions—sports and performing.”

And that passion for sports hasn’t exactly been a secret.

Drake recently made an appearance in the Kentucky Wildcats’ locker room after their Final Four victory — giving a brief pep talk. “This is your story, man. This is your time. I watched it happen today.”

And somewhat famously got turned away from the Miami Heat locker room after they won last year’s NBA championship.

Man off-camera: “Drake getting turned down.” (Via YouTube / ESPN760)

He’s also a global ambassador for his hometown Toronto Raptors, which according to SB Nation means they occasionally celebrate “Drake Night” and he gets to announce the starters.

Ok. We get it. He loves sports. So how did he land the gig?

Well, according to TMZ, it was his resume.

And a recent and positively-reviewed hosting gig on SNL. (Via NBC / 'Saturday Night Live')

Drake will be following Jon Hamm, who hosted last year, and won't be the first musician in the role.

The ESPYs will be held July 16th at the Nokia Theatre in Los Angeles.