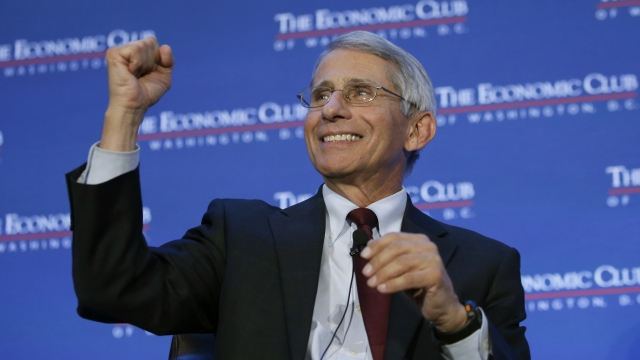 Dr. Fauci is part of an old federal system called the CSRS system, and it was disbanded in 1987.

So who is the highest paid person in the government? The answer may surprise you. Here's a hint, it's not President Joe Biden, who reportedly makes $400,000 a year as Commander in Chief. So, the question is, who is it?

MarK Scribner, managing director at Oxygen Financial, tells Newsy that this person is Dr. Anthony Fauci, the director of the National Institute of Allergy and Infectious Diseases.

Linsay Tuchman: So why does Dr. Fauci make more money than the President of the United States?

So, he's part of an old package that was not very effective for pensions that was costing the government way too much money, so they stopped it, but he's still on that program.

Tuchman: So, and in part has to do with just his longevity of serving in the position that he's in?

Scribner: You know, I'm a financial advisor, I have clients that work for the FBI, ATF, and they've had the same tenure in terms of length of service. They don't have those kinds of packages, they are, you know, maybe $80,000 a year in pensions, they have a million dollars in their retirement accounts, Dr. Fauci has about $10.4 million in his investment accounts, so there's definitely a disparity.

Tuchman: Interesting. So, as we're talking about government employees making money, there's the salary of course, but we've also seen politicians on both sides of the aisle profiting off of the stock market, and sometimes it's due to some information that they have, or something that they know about, and that of course, faces a lot of criticism. What are your thoughts on making sure that doesn't happen in any, sort of way that could be seen as something to be criticized?

Scribner: Well, for your viewers, there's a great website called Unusual Whales and it goes through each politician and it's not a, it's not a red or blue type of a topic, it's all across the board, but they are definitely having access to inside information.

Now, I'm a financial advisor and there's a term called 'front running,' that basically prohibits us from buying an individual stock for our own accounts ahead of a client account, but they have access to trade deals, all kinds of big announcements and they buy individual stocks, and this was something that was attempted to be resolved, and it's called the Stock Act.

It got watered down in 2013, but they are buying ahead of, you know, some major announcements, major trade deals, and it actually ruins the integrity of the market when you know, they have access to inside information that the average person can't.

It's completely unacceptable and I think it just erodes trust for the consumers.