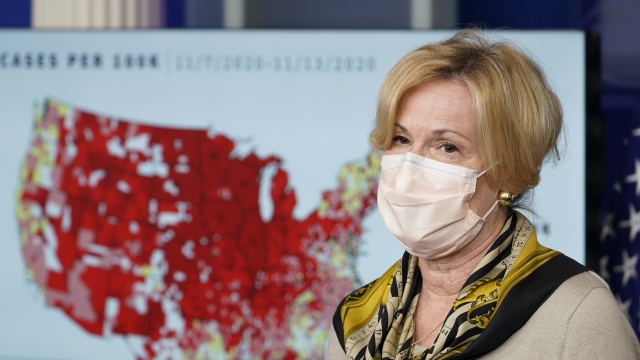 A strong warning from a member of the White House Coronavirus Task Force.

Dr. Deborah Birx said while a vaccine will help end the pandemic, people need to keep up efforts to stop the spread of the virus. She called the next couple of months critical.

Dr. Deborah Birx: "And every state needs to be critically informing their state population that the gatherings that we saw in Thanksgiving will lead to a surge. It will happen this week and next week. And we cannot go into the holiday season, Christmas, Hanukkah, Kwanzaa with this same kind of attitude, that those, those gatherings don't apply to me. They apply to everybody."

Birx said she was excited about the positive news of a potential vaccine candidates, but reminded people it won't be available to everyone for months.

And while the majority will have to wait for the vaccine — I know a lot of you are eagerly awaiting life going back to some semblance of normalcy — the chief adviser of for U.S. vaccine efforts says he sees "light at the end of the tunnel" and says he plans to meet with President-elect biden's team this week to discuss vaccination vaccine distribution.

Dr. Moncef Slaoui: "We haven't had a chance yet to sit down with the transition team and explain in detail everything that has been planned and been done. We look forward to that happening. We actually, i think, have a meeting planned later this week. And I'm confident that, together, we will do the best we can to make sure that the vaccines are delivered safely and effectively to all Americans."