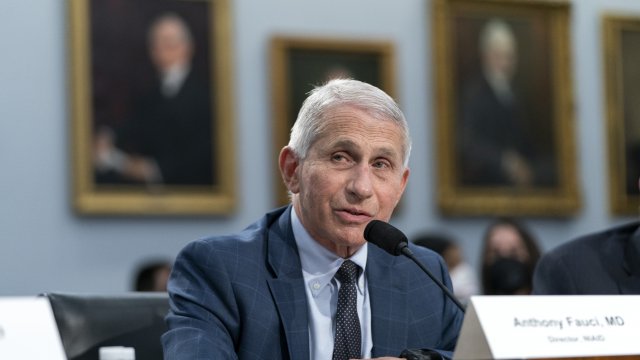 SMS
Dr. Anthony Fauci On Variant-Specific COVID-19 Vaccines
By Newsy Staff
By Newsy Staff
July 7, 2022
"We need to pay attention to them and not just blow them off," Dr. Fauci said of the variants.

The World Health Organization says the number of weekly COVID-19 cases has gone up for the fourth week in a row. Between June 27 and July 3, there were more than 4.6 million new cases reported around the world. That's nearly a 30% increase, and that number doesn't include at-home tests.

The WHO says there was an increase in four out of the six regions it oversees. The American and African regions were the only regions to report a decrease.

In the U.S., the new Omicron subvariant BA.5 makes up the majority of new infections, and places like New York City and Los Angeles are seeing a slight rise in cases again.

While the number is still low compared to previous surges, the U.S. is now averaging around 100,000 new cases a day.

"We need to pay attention to [the variants] and not just blow them off," President Biden's Chief Medical Adviser Dr. Anthony Fauci told Newsy. "We could have an uptick in cases as one variant replaces another … We will likely continue to see cases smolder and perhaps even increase."

Fauci said people who are getting infected with COVID are using at-home tests but not reporting the positive cases.

In the U.S., people of all ages are now eligible for the vaccine. But as of June, just under 30% of 5-to-11-year-olds were fully vaccinated.

Fauci says "there is good cross-protection against serious diseases with the vaccines" and encourages parents to get their children vaccinated.

"We had an initial push on vaccines from parents who were waiting anxiously to have available vaccine … but we've got to do better in the numbers because we still have a relatively small fraction of those children who are eligible and we need to get them vaccinated," he said.

Additionally, Fauci said "there will very likely be a bivalent vaccine," which he explained to be a booster containing the vaccine used for the original virus and a vaccine with an updated variant vaccine, which could be available "sometime in October, hopefully ready for what might be a fall surge in cases."