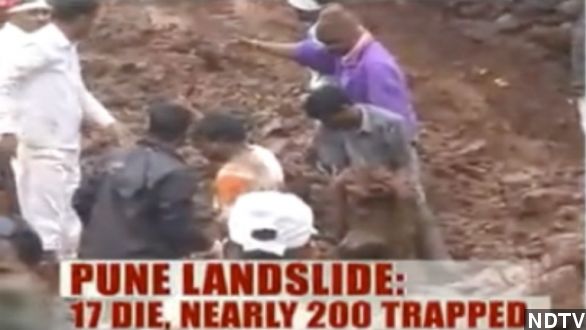 By Jamal Andress
July 30, 2014
Landslides Wednesday in the Pune district of India might have killed more than 15 people and trapped dozens more.
SHOW TRANSCRIPT

Landslides in western India Wednesday may have killed more than 15 people and trapped dozens more, according to media reports.

"The situation is grim. Many people are trapped inside, and officials here fear that number of dead is going to go up significantly." ​(Via NDTV)

According to the BBC, the mudslide hit in the early morning while most of the villagers were still sleeping — burying or washing away everything but the village school.

"One of the reasons they've been taking so long to reach this area is because it is a hilly area. ... The roads are quite tricky; it is the monsoon season and has been raining very heavily in this part over the last few days."

The Times of India reports there are more than 370 doctors, paramedics and first responders who are either "at the [mudslide] spot or traversing the muddy approach road on foot."

The prime minister of India sent out this tweet early Wednesday morning describing the mudslide as saddening and saying the home minister is going to the region to assess the situation.

The natural disaster occurred in the Pune district more than 90 miles from Mumbai, the country's most populous city, and almost 10 miles from the nearest medical center.