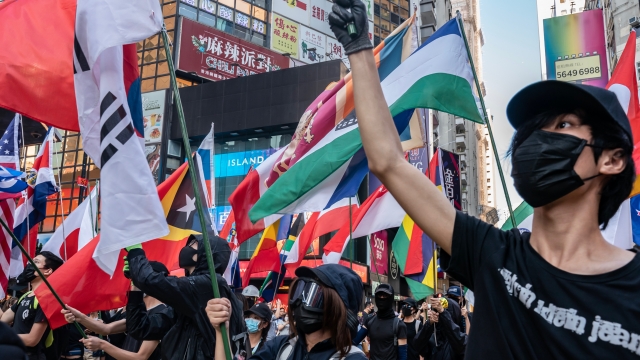 SMS
Dozens Injured In Wave Of Violent Hong Kong Protests
By Briana Koeneman
By Briana Koeneman
November 4, 2019
In all, officials said more than 70 people were sent to the hospital over the weekend to receive treatment for their injuries.
SHOW TRANSCRIPT

Dozens of people are injured, some seriously, after a violent weekend of anti-government protests in Hong Kong.

According to reports from the area, demonstrators vandalized multiple buildings on Saturday and Sunday, including the state-run Xinhua news agency.

Police stormed shopping malls and launched tear gas, fired rubber bullets and a water cannon into crowds of protesters across the city.

On Sunday, a man armed with a knife injured several people outside a mall in Taikoo Shing — including a Hong Kong lawmaker who authorities say had part of his ear bitten off. The suspect was arrested and taken into custody.

In all, officials said more than 70 people were sent to the hospital over the weekend to receive treatment for their injuries. And at least 200 people were arrested for various infractions, including unlawful assembly and criminal damage.

The protests in Hong Kong have been going on for months now. In late October, Hong Kong's Legislative Council formally withdrew a controversial extradition bill that sparked the protests in the first place.

But demonstrators are still taking to the streets with other demands, like democratic reforms and an inquiry into police practices. More protests are planned for this week.