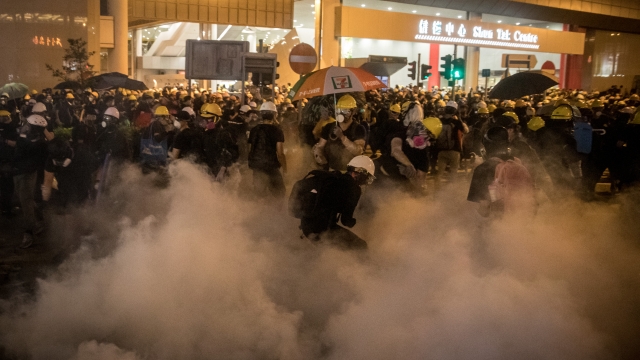 Dozens were hospitalized in Hong Kong Sunday night after a group of men attacked commuters inside a train station in the Yuen Long district.

Videos captured at the scene show the group was wearing white T-shirts and some of the men had masks on. Many carried batons, which they used to hit people both on the train platform and inside some train cars. Hong Kong officials said that 45 people were injured, including one who was in critical condition.

Multiple outlets report the attackers appeared to be specifically targeting commuters dressed in black. That's the color anti-government protesters had worn to a demonstration earlier in the day.

That protest started off peacefully Sunday. But police later fired tear gas and rubber bullets at the protesters after thousands moved past a mandated end point for the rally and defaced the Chinese government's liaison office building.

Demonstrators have been protesting for seven consecutive weeks over a now-suspended extradition bill, which would have allowed China to extradite suspects from Hong Kong.

Although leader Carrie Lam has said the bill "is dead," critics still want it to be formally withdrawn to prevent the bill from being fast tracked through the legislative process in the future. Protesters are also calling for Lam to step down, an independent investigation into allegations that police have used excessive force on demonstrators and democratic reforms.

On Monday, Lam condemned both the train station attack and the attack on China's liaison office, saying, "Violence is not the solution to any problem.

Some protesters and lawmakers criticized the Hong Kong police for being slow to arrive at the train station Sunday night. The territory's police commissioner said Monday that the delay partly stemmed from the fact that the two officers who initially arrived on the scene had to wait for back-up since they didn't have the necessary protective gear.