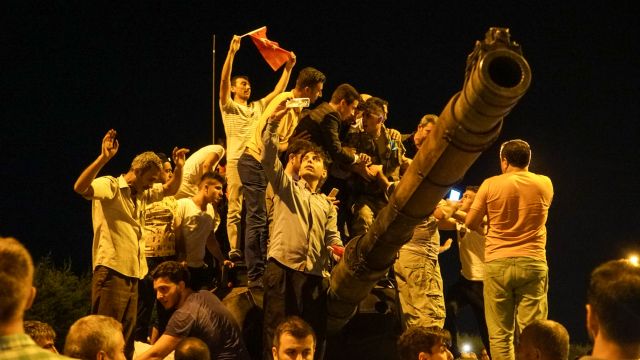 SMS
Dozens Dead In Turkey After Chaotic Coup Attempt
By Matt Picht
By Matt Picht
July 15, 2016
An attempted military coup in Turkey has left dozens dead and the country in disorder.
SHOW TRANSCRIPT

Turkey's President Recep Tayyip Erdogan says the perpetrators of an attempted military uprising in the country will "pay for this in the harshest way."

Erdogan's comments follow a night of chaos in Turkey. A bomb reportedly hit the country's parliamentary building, and gunfire and explosions have rocked Ankara and Istanbul. Several agencies report at least 42 people have been killed around the country.

Military rebels took over multiple media outlets to announce they'd seized control from the government and were declaring martial law. Turkey's military has intervened several times to overthrow past regimes.

Government officials have blamed a small faction within the military for the coup attempt and say they still have the country under control. Protesters flooded the streets at Erdogan's urging to denounce the attempted takeover.

Erdogan has blamed the revolt on sympathizers of Fethullah Gülen, an exiled politician who challeged Erdogan's power several years ago. A group affiliated with Gülen has condemned the coup attempt.

This video includes images from Getty Images and clips from BBC and DHA.