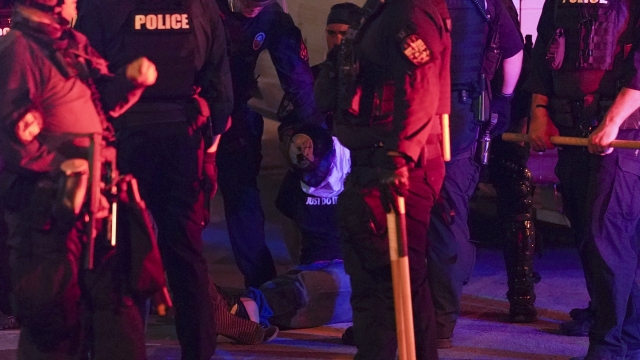 Anger over a lack of criminal charges against police officers for killing Breonna Taylor continued into the weekend in Louisville, with demonstrations and dozens of arrests.

The weekend saw 22 people arrested on Friday and 28 on Saturday mostly for breaking a 9 p.m. curfew. Officers deemed protests"unlawful" after several fires were set near local churches and a car was also set ablaze. Officers say, however, protests remained peaceful.

Louisville Mayor Greg Fischer said he understood protester's feelings, but asked them to keep calm. He said, "I’m mindful that many in our community are hurting and angry about the decisions announced this week. ... We just ask you to do that peacefully please."

Kentucky Attorney General Daniel Cameron announced last week there would be no charges against officers involved in Taylor's death that were directly linked to her killing.

Former Louisville police officer Brett Hankison was charged with three counts of wanton endangerment for shooting blindly and potentially injuring the family that lived next door to Taylor. The other two officers involved in the shooting, Myles Cosgrove and Jon Mattingly, were not charged.