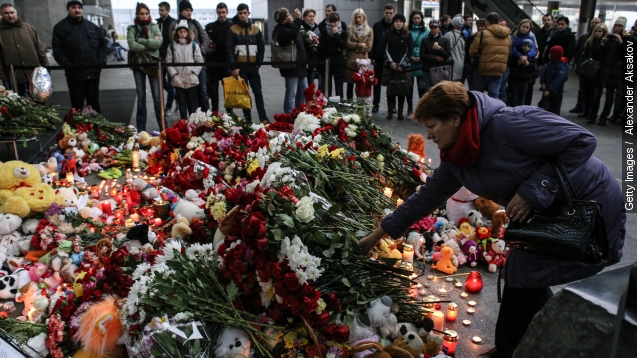 A Russian aviation official said the Kogalymavia flight that crashed in Egypt was destroyed in the air. The cause is still unknown.

The Russian plane that crashed in Egypt's Sinai Peninsula on Saturday was reportedly destroyed before it hit the ground, according to a Russian aviation official. (Video via Radio Free Europe/Radio Liberty)

The executive director of Russia's Interstate Aviation Commission told the state-funded RT it was too soon to draw any conclusions. But he said: "The destruction [of the plane] happened in the air and the fragments scattered over a large area."

Two hundred and twenty-four people were on board, most of them Russian. Officials say there are no survivors and the cause is still unknown. Over 150 bodies have been recovered so far, according Egypt's state-run information service. (Video via CNN)

The plane, operated by Russian airline Kogalymavia, was discovered in two separate pieces, and both black boxes were recovered.

Russian President Vladimir Putin has ordered an official investigation into the crash, and a criminal case has been opened against the airline.

And speaking at a military symposium, Egyptian president Abdel-Fattah el-Sissi welcomed Russian cooperation and said "the issue is being extensively investigated."

Sunday vigils were held across Russia as Putin declared a national day of mourning for the victims and their families.

This video includes images from Getty Images and Aktug Ates.