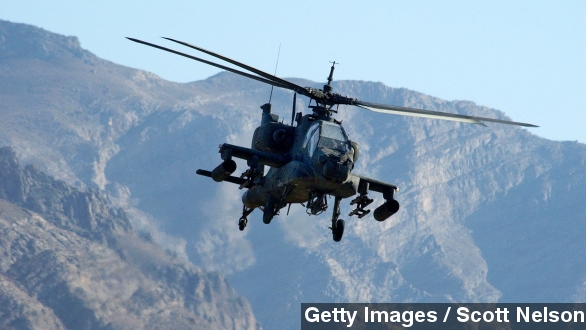 Two Idaho National Guard crew members are dead after an Apache helicopter crashed near their Boise base Thursday night.

The crash happened after dark, and the Idaho National Guard has confirmed the Apache was conducting a routine nighttime training exercise.

KTVB reported neighbors who own the field where the crash happened near Boise Airport didn't hear the Apache go down, and the National Guard was only notified when an emergency beacon aboard the helicopter went off.

Local media outlets reported the Idaho National Guard unit based at Boise Airport has 16 Apaches, which are attack helicopters as opposed to troop or utility transport aircraft like the Blackhawk. (Video via Boeing)

A statement given by the base's public affairs colonel was extremely short — less than 30 seconds. The guard has not released the names or ranks of the crew members who died. (Video via KBOI)

The colonel did say he didn't expect to release that information until at least Friday afternoon. The county coroner's office in Boise confirmed both of the crew members were men. (Video via KIVI)

The local newspaper Idaho Statesman reports both aviation and military officials will be in charge of the crash investigation.