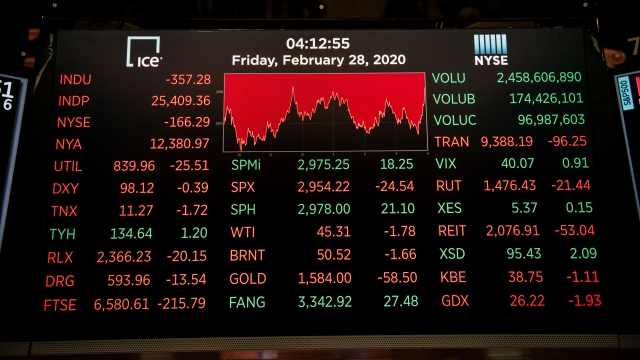 When the bell rang Friday, it capped off an absolutely brutal week for the stock market. In fact, this past week was the worst the markets have seen in more than 11 years.

The Dow Jones lost 357 points on Friday, wrapping up a week where it lost more than 3,500 points, its largest weekly point loss ever. And its 12% drop is the biggest since October 2008 during the global financial crisis.

Economic experts say the coronavirus is mostly to blame, as it's hurting businesses, shopping centers and tourism.

Global markets, including those in Japan, Italy and Germany, have all experienced similar drops.

The CDC says there will likely be an increase in coronavirus cases in the U.S., and it's telling Americans to prepare now. On Friday, the World Health Organization raised its global risk assessment of the virus' spread to its highest level.

More than 83,000 people have been infected worldwide, most of them in China, where the outbreak started.

Despite this, Trump administration officials said in a press briefing on Wednesday that the risk to the American public remains low.

Additional reporting by Alex Veiga and Damian J. Troise of the Associated Press.