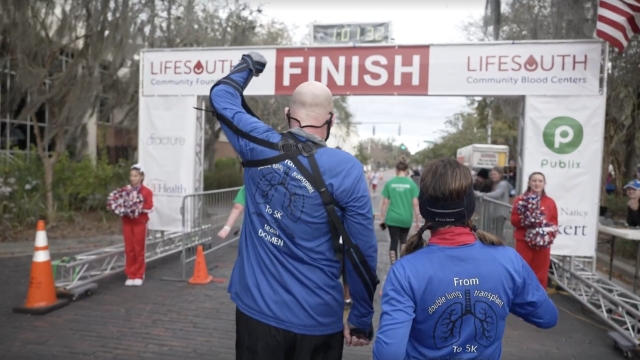 SMS
COVID-19 Lung Transplant Patient Says He Has A New Lease On Life
By Haley Bull
By Haley Bull
February 21, 2022
Robert, an active duty marine, received a double lung transplant at the University of Florida Health Shands Hospital after a battle with COVID-19.

When the race begins for Robert and Debbie Domen, it's a culmination of a tough road with a lot of hard work, by a lot of people, to get to the starting line in Gainesville, Florida.

The night before the race, the Domens recounted their journey.

"Just a couple months ago I was in a hospital bed and now we're getting ready to go out and do a 5K together," said Robert.

"I just think it's going to be the biggest celebration, truly, of life," said Debbie.

Robert, an active duty marine, received a double lung transplant at the University of Florida Health Shands Hospital after a battle with COVID-19.

"The road to get here was a fight between life and death, every day. And there is no way to describe what that felt like," said Debbie.

"My wife, my nurses, my therapists, my doctors, they all participated in this to some level. Each and every one of them will always hold a special place in my heart. And same thing with my organ donor," said Robert.

When he returned home in December after months in the hospital, he returned home to a new normal: Dozens of pills a day, multiple appointments a week, but with what the Domens called a new lease on life.

"We definitely look at this entire experience as being a positive because I'm still here, and we're still together," said Robert.

It was months ago in the hospital after his transplant his doctor asked him to set a short term goal. Robert and Debbie landed on a 5K race.

They ran races, even a marathon, before COVID, and as a marine Robert was very active; so for them, it was a step towards their normalcy.

"I knew that if he said it, it was gonna happen," said Debbie.

"We've both been very much goal setters and attainers for a long time so we just knew that we knew the time span we needed and what we needed to do to get there. So I knew when we set the goal that we were gonna meet that goal," said Robert.

It started with just steps down the hallway, to a slow pace on the treadmill and a little farther each time, with his medical team helping motivate and push him.

Saturday, it took him to the LifeSouth Race Weekend by the LifeSouth Community Foundation. The event raises awareness for blood donation, and for Robert personally, organ donation.

"The ongoing need for blood donation is important. It's every day," said race director and foundation manager Robin Politowicz. "To see someone who has gone through so much whose life was saved by the generosity of the organ donor family, the blood donors that helped his journey and for him to be such an enthusiastic proponent of organ and blood donation — we're just thrilled to have him here."

Robert underscored that people must opt in to be an organ donor.

"We know that with our new lease on life that that family lost something precious to them as well and we just want to live up to that gift and let them know that organ donation is important," he said.

So step by step, dubbed the 'Miracle Man,' Robert inspired those around him as he led a village of family, friends, service members and members of his medical team.

"It's beautiful, we're so proud of him," said Tierra Dozier, a nurse.

"To see it come to something like this physical feat where you get your lungs working it's really really an amazing thing just to witness," said Cristina Phillips, a clinical nurse leader at UF Health. "To see that, it kind of restores your will to work so hard for these people because you see why it matters so much," she later added.

With the finish line in sight, Robert was determined to go faster, stronger and reached his goal.

"Having my support team here with me, with nurses and doctors and friends and family, beyond. I mean absolutely beyond that's all I can say, that's fantastic," said Robert.

"Well when you can see something in your head three months before and you actually see it happen today, that's amazing, because you know I know this man can do it and he did he showed them that's it," said Debbie.

He then thanked the team at UF Health who helped him.

Yet crossing the line wasn't an ending, but the beginning of a new road. But no matter the journey, no matter the struggle, the Domens share this:

"Don't be complacent just live your life to the absolute fullest because you never know when tomorrow never know what tomorrow holds," said Robert.

"Never be scared to dream because you can do what you want to. You can set a goal for yourself and achieve it. If you can dream it you can achieve it," said Debbie. "Glory to God, glory to God."

Robert has more goals. He said he wants to next complete a half marathon by the end of the year.