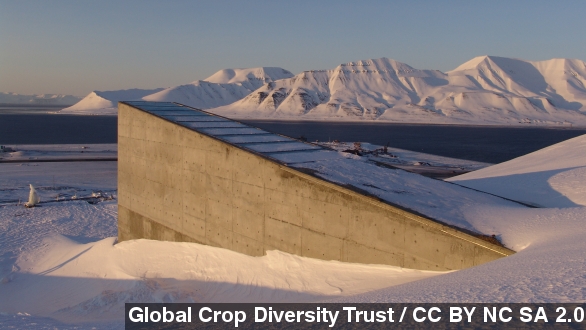 At the top of the world, on a frozen island called Svalbard, there's an underground bunker called the Svalbard Global Seed Vault, more commonly known as the "doomsday" vault. (Video via Google Earth)

In that "doomsday" vault there are lots and lots of frozen seeds of crops from all over the world, just in case humanity ever needs to start over. (Video via General Electric)

The trees' seeds are being added as part of the vault's broader mission to not just safeguard the plants, but also to monitor changes in genetic diversity over time. (Video via Kino Lorber / 'Seeds of Time')

The vault was opened in 2008, the product of a collaboration between two conservation groups: the Global Crop Diversity Trust and the Nordic Genetic Resource Center, along with the Norwegian government, which footed the $9 million construction bill. (Video via National Geographic)

It's the brainchild of a handful of conservationists including Cary Fowler, who explained the need for the vault in a 2009 TED talk.

"In recent years, we lost the gene bank, the seed bank in Iraq and Afghanistan — you can guess why — in Rwanda, in the Solomon Islands. ... We needed a really safe place, and we went quite far north to find it," Fowler said.

The basic argument is, in the face of climate change, the more diversity, the more resilient the agriculture, because some seeds that aren't economical now, may be better equipped to withstand challenges in the future, or vice versa. (Video via Global Crop Diversity Trust)

The vault expects more tree seed donations from participating countries — all of which retain ownership of the seeds they donate. (Video via Ancient Forest Alliance)