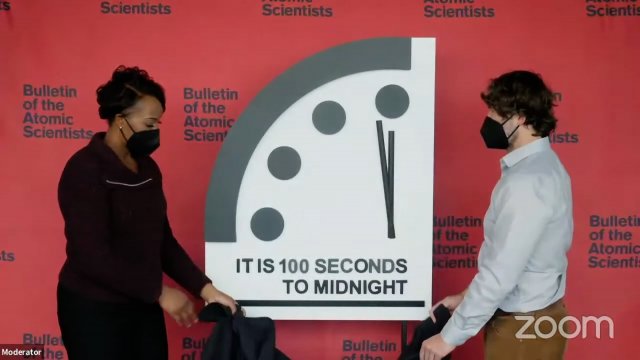 SMS
Doomsday Clock Remains At 100 Seconds To Midnight In 2022
By Jason Bellini
By Jason Bellini
January 21, 2022
Factors that go into this are the ongoing nuclear threat, climate change and the long-running COVID pandemic. They all keep the threat level high.

"Stuck in a perilous moment." That's how a board of scientists and experts describes where we are today, as it keeps the Doomsday Clock set to "100 seconds to midnight" for the third year in a row.

The judgment of leading scientists is that we, humankind, remain as close to the brink as ever.

"The Chinese are constructing new ICBM silos on a large scale, leading to concerns that China is considering moving away from a no-first-use delayed response doctrine to a launch-on-warning doctrine. The U.S., Russia and China are all building hypersonic missiles," explains Scott Sagan, political science professor at Stanford.

Scientists also noted, in this year's announcement, internal threats to security. The board described last year's insurrection at the U.S. Capitol as having had the potential to cascade toward catastrophe.

Over the past 75 years, the Doomsday Clock has mostly been concerned with nuclear war, the threat of nuclear armageddon.

"It was solely focused on nuclear exchange. In 2007, we added climate change to the Doomsday Clock," Rachel Bronson, Bulletin of the Atomic Scientists president and CEO, tells Newsy.

Just five years ago, the clock was at "two-and-a-half minutes." Since then, global inaction on climate change, in their view, has set us back and the clock forward.

Add to that the threat to humanity posed by pandemics and biological weapons being developed.

"We stand on the precipice of a biological cataclysm. It will take very little more from this area to push us over the edge," warns Asha George, Johns Hopkins School of Public Health adjunct professor.

"You know why we're 100 seconds to midnight? Because having a roommate is a pain in the butt. So don't expect it to be easy to have 7 billion planet mates. We're not all going to agree on stuff, but we still have to work together," explains Hank Green, author and science communicator.

Work together, or work against the ticking clock.