Trump Touted Syrian Safe Zones, But It Doesn't Appear To Be Happening 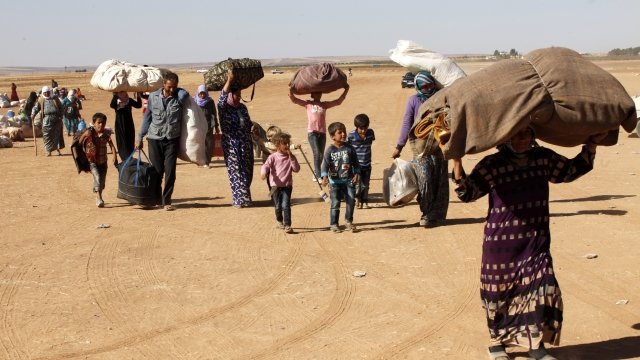 SMS
Trump Touted Syrian Safe Zones, But It Doesn't Appear To Be Happening
By James Packard
By James Packard
April 25, 2018
Donald Trump talked during his campaign about keeping Syrian refugees out of the U.S. and setting up safe zones in Syria. That hasn't happened.
SHOW TRANSCRIPT

President Donald Trump made a lot of promises when he was a candidate, and for all the promises he's kept, as with many politicians, a lot of them have fallen by the wayside now that he's in office.

Take his promise to create a safe zone for civilians in Syria.

"Take a big piece of land in Syria — and they have plenty of land, believe me — build a safe zone for all these people," Trump said. "They shouldn't come over here. We should build a safe zone and put up some money."

First of all, safe zones are really complex to establish. Beyond that, the president recently said he wants to bring American troops home from Syria, which conflicts with the idea of setting up a safe zone. That would require protection from ground troops.

Experts say the Trump administration's current policies don't reflect a real focus on setting up safe zones. The campaign promise doesn't seem to be going anywhere, at least for now.