Steve Bannon's Days As Chief Strategist Are Over 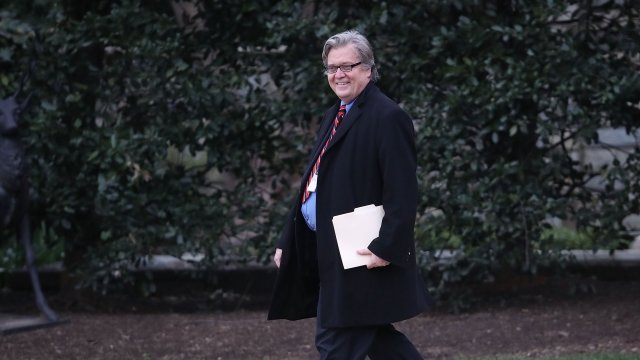 Another controversial figure in President Donald Trump's inner circle — chief strategist Steve Bannon — is out of a job.

Prior to working for the Trump administration, Bannon ran the right-wing news outlet Breitbart.

He worked on Trump's presidential campaign and accepted a government job soon after Trump won the 2016 election.

In an unusual move, Trump gave Bannon a seat on his National Security Council, but that didn't last long. Trump removed him from the NSC a few months later.

And while Bannon started off as one of Trump's key players, he later maintained a lower profile. He didn't travel with Trump on some big trips, like the G-20 summit, and he stopped attending some major policy meetings.

Earlier this week, Bannon vented about Charlottesville, identity politics and North Korea to The American Prospect — a liberal magazine that's been critical of Trump. Bannon later said he didn't realize he was being interviewed.

It's unclear if Bannon will be replaced as chief strategist.