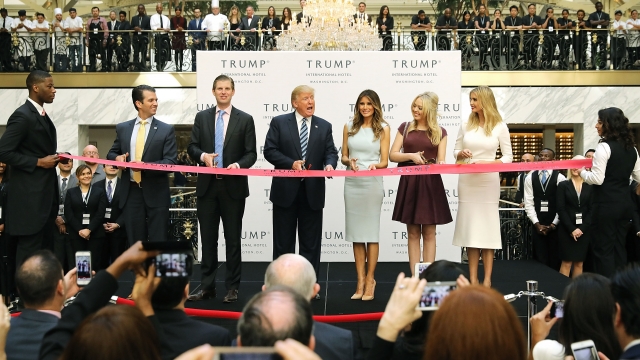 The conflicts of interest in Donald Trump's presidency span the globe, but there's a really obvious one right down the street from the White House.

Trump doesn't actually own the building that houses the Trump International Hotel in Washington, D.C., formerly the home of the Old Post Office.

His company is leasing it from the General Services Administration — a government agency that's under his control as president.

The General Services Administration is under the executive branch of the federal government. It manages government properties, like the building Trump's D.C. hotel is in. The president appoints the administrator of the GSA.

And there are actually rules in place to prevent this kind of thing.

The Trump Organization made a 60-year agreement with the GSA to lease the building. But the federal acquisition system prohibits entering into contracts with federal employees, including "business concern or other organization owned or substantially owned or controlled by one or more government employees." That would include a company like the Trump Organization.

As The Washington Post pointed out, even the lease for the hotel states that "no … elected official of the Government of the United States … shall be admitted to any share or part of this Lease, or to any benefit that may arise therefrom."

And it's not just the fact that Trump is leasing a government building from a government agency that he controls. The D.C. hotel also presents other conflicts of interest.

Trump held an event for foreign diplomats at the hotel to show it off. One Asian diplomat told The Washington Post he'd definitely stay at the hotel just to gain favor with the new president, saying it would be "rude" to stay somewhere else.

That could conflict with the so-called Emoluments Clause of the Constitution, which prohibits office-holders from accepting gifts or bribes from foreign governments. Trump's presidency will put ethics rules like that to the test.