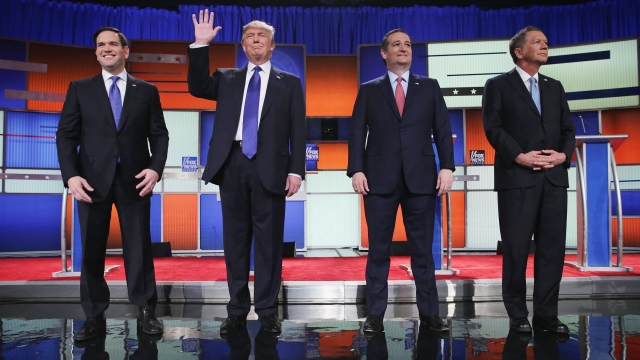 SMS
Donald Trump Pushes A Change For Republicans On Free Trade
By Kate Grumke
By Kate Grumke
March 10, 2016
The GOP has made free trade one of its primary policy goals for decades, but Donald Trump is pushing his competitors away from that.
SHOW TRANSCRIPT

For decades, the Republican Party has put free trade at the center of its policy goals.

"I want to have more of these free trade agreements. ... I believe in free and fair trade," said President George H.W. Bush.

But on Thursday, none of the remaining GOP candidates said they would outright support tax-free trade.

It's a dramatic shift that has a lot to do with this guy.

"I am different in one primary respect, and that's trade. ... Trade deals are absolutely killing our country. ... We're gonna have to do taxes unless they behave," Donald Trump said.

Donald Trump's rhetoric on trade has spread into the proposals coming from his GOP rivals — likely an effort to get in with Trump's supporters.

"There are good trade deals and there are bad ones," Sen. Marco Rubio said.

And it's not just Republicans. Sen. Bernie Sanders' ideas on trade are actually similar to Trump's.

"I voted against disastrous trade deals that have destroyed our middle class."

Hillary Clinton can't separate herself from trade deals so easily. The North American Free Trade Agreement was signed by her husband, but she has come out against President Obama's Trans-Pacific Partnership, or TPP, agreement, which she once supported.

This video includes Getty Images, video from CNN and music by MADS / CC BY 3.0.