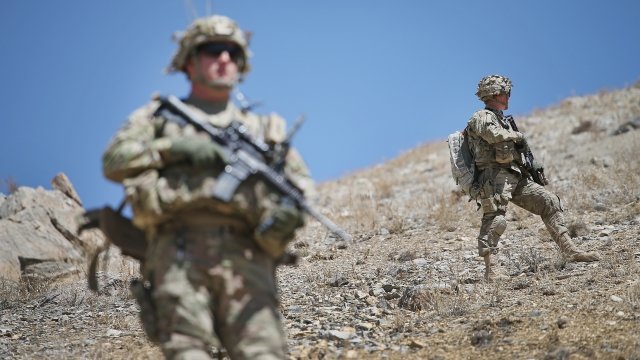 President Donald Trump outlined his Afghanistan policy in a speech at Fort Myer, Virginia, on Monday night. Basically, Trump is calling for more U.S. troops in the country.

Trump said: "My original instinct was to pull out, and historically, I like following my instincts. But all my life I've heard that decisions are different when you sit behind the desk in the Oval Office. ... The consequences of a rapid exit are both predictable and unacceptable."

The U.S. has been on the ground in Afghanistan since October 2001. Since then, there have been as many as 100,000 American troops in the country at one time. More than 2,200 U.S. troops have died there.

Right now, about 8,300 U.S. troops are in Afghanistan. And the mission has been bogged down by green-on-blue attacks, successful Taliban raids and turncoats within the Afghan military.

A report to Congress estimates the Afghan government controls just under 60 percent of the country's districts. Security officials have called the situation with the Taliban a "stalemate."

Sen. John McCain put forward a new strategy for the war in Afghanistan after the Trump administration didn't deliver one by its proposed deadline.

The president returned to Washington, D.C., on Sunday after a more than two-week vacation in Bedminster, New Jersey. During that period, Trump made headlines several times for his comments on North Korea and the violence in Charlottesville, Virginia.

He warned that North Korea would be met with "fire and fury like the world has never seen" after the country said it was considering a plan to launch a missile strike on the U.S. territory of Guam. A few days later, he said "many sides" were responsible for the violence in Charlottesville, Virginia, that left three people dead. Trump then seemingly doubled down on that statement in a press conference intended to be about infrastructure; several Republicans rebuked Trump's statements. Trump shut down two advisory boards after a number of business leaders stepped down in protest.

Trump alluded to the controversies by saying: "As we send our bravest to defeat our enemies overseas – and we will always win – let us find the courage to heal our divisions within."