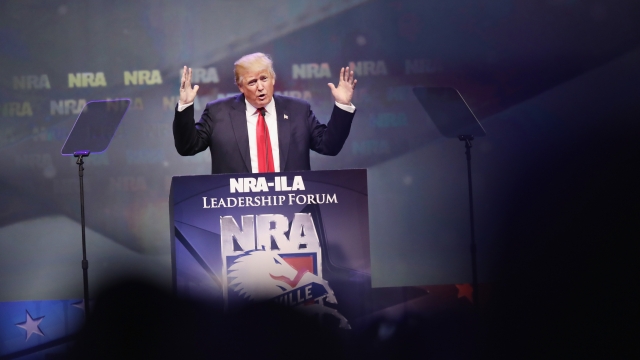 Donald Trump has made a lot of campaign promises — and one of those promises involves guns.

Trump certainly toes the Republican Party line in supporting the Second Amendment and the right to bear arms.

"It gets weaker and weaker. We're not gonna let it happen. We are going to protect our second amendment," Trump said in a campaign video.

On his campaign website, the president-elect says he wants to defend the rights of "law-abiding gun owners" by eliminating gun and magazine bans, fixing the background check system instead of expanding it and instituting a national right to carry.

The 2016 Republican Party platform calls for "firearm reciprocity legislation to recognize the right of law-abiding Americans to carry firearms to protect themselves and their families in all 50 states."

Trump's support of a national right to carry has some gun control advocates concerned. Currently, each state sets its own rules on whether a concealed-carry permit from another state is valid within its borders.

According to the Legal Community Against Violence, nine states — California, Connecticut, Hawaii, Maryland, Massachusetts, New Jersey, New York, Oregon and Rhode Island — do not recognize permits from others states in any capacity.

Supporters of a national right to carry — including the National Rifle Association — argue that people who legally carry concealed weapons are some of the most law-abiding citizens.

Opponents point to the disparity of requirements between states, noting that some states require permit holders to complete a training course, while others don't require any training.

But concern about changing the country's gun laws might be premature. Trump did not include anything about gun laws in his plan for his first 100 days in office.