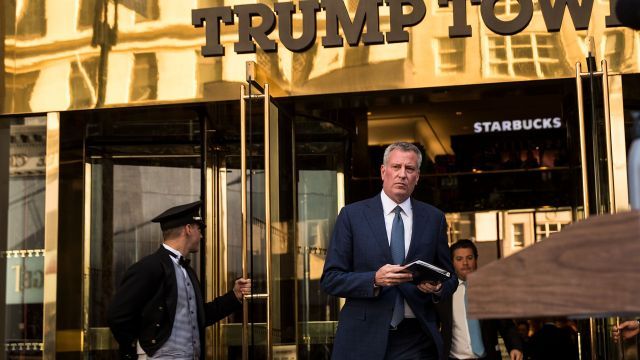 "This was a respectful meeting and a substantive meeting, and a very candid meeting," de Blasio said.

SEE MORE: Many Americans Don't Think Trump Can Carry Out His Agenda

De Blasio said he outlined his concerns with a potential Trump administration and relayed the fears of the many New Yorkers who've protested Trump's election win. He didn't describe Trump's reaction.

De Blasio also addressed the security and traffic issues that have arisen now that the president-elect has taken residence in Trump Tower in downtown New York. The mayor said he's working to address the issue but added complaints from high-end retailers inside the tower were not his "central concerns in life."

De Blasio and Trump are basically political polar opposites, and they occasionally sniped at each other during the election.

During a radio interview with WOR 710, de Blasio said, "Donald Trump, who's a blowhard, who is saying things that will play right into ISIS' hands."

And when asked about de Blasio, Trump told CBS: "He's turned out to be a terrible mayor. He doesn't know what he's doing. I mean, the guy is incompetent."

SEE MORE: Man Scales Trump Tower To Get A Meeting With The Donald

And while de Blasio has struck a conciliatory tone following Trump's election, he's also vowed to resist any of Trump's policies that will hurt New Yorkers.

Specifically, de Blasio said he would use his authority to block any attempts to reintroduce policing tactics like stop-and-frisk, as well as any attempts to deport "peaceful" immigrants.