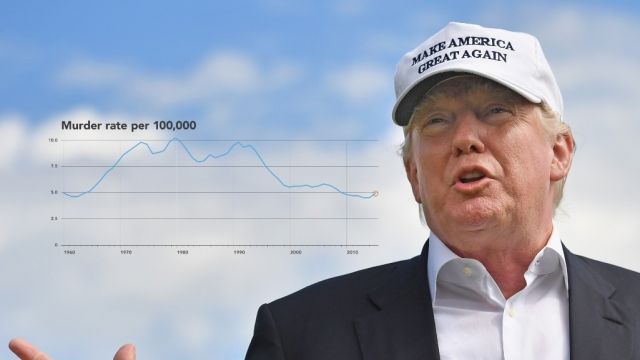 "The murder rate has experienced its largest increase in 45 years. … We are going to bring this terrible crime wave to an end," Trump said.

Let's look at the numbers from FBI data. The murder rate climbed throughout the 1970s and '80s. But since then, it's been on a steep decline. In the last year, that rate is up just a small percent but still way lower than the last few decades.

And anyway, Trump has his numbers wrong. He says this is the largest murder rate increase in 45 years, but that's not true. That's true for the increase in the number of murders, which is different.

So, considering that graph, why does Trump say there's a crime wave? Maybe because most Americans falsely think there is one. And they have for a while.

Even though crime is down since 9/11, every year a vast majority of Americans think there's more crime, not less. And now they have someone who falsely tells them they were right all along.