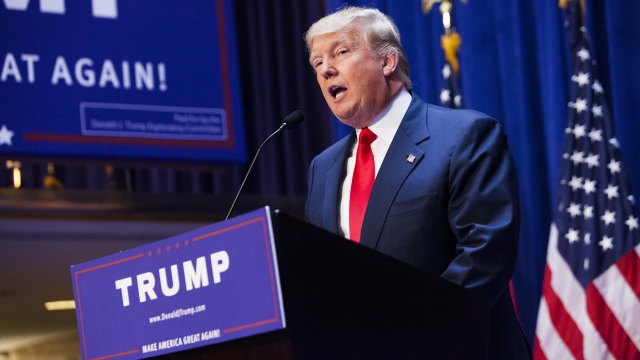 SMS
Donald Trump Falsely Claims There Was 'Serious Voter Fraud'
By Briana Koeneman
By Briana Koeneman
November 28, 2016
The president-elect said he believes voter fraud took place in Virginia, New Hampshire and California. But there isn't any evidence to back that up.
SHOW TRANSCRIPT

In a move some are calling "stunning" and "bogus," Donald Trump claimed there was "serious voter fraud" in the presidential election.

The president-elect said in a series of tweets Sunday night he believes voter fraud took place in Virginia, New Hampshire and California. And he called out the media for not reporting on it.

He also alleged that he would have won the popular vote if "millions" of people hadn't voted illegally.

According to the latest vote tally, Hillary Clinton won the popular vote by more than 2 million votes.

Trump didn't offer any evidence to back up his claims. And there doesn't appear to be much out there.

There are a few voter fraud investigations happening now. But most of those investigations began before the election because of voter registration — not because fraudulent votes were cast.

One election law expert told Politico, "You're more likely to get eaten by a shark that simultaneously gets hit by lightning than to find a non-citizen voting."

Trump's camp has dismissed the idea that any recounts are needed. In a statement, the campaign called the effort a "scam," adding, "The results of this election should be respected instead of being challenged and abused."

According to historians, Trump is the first winning presidential candidate to question the legitimacy of the election process. Electors are scheduled to meet Dec. 19 to officially cast their votes.